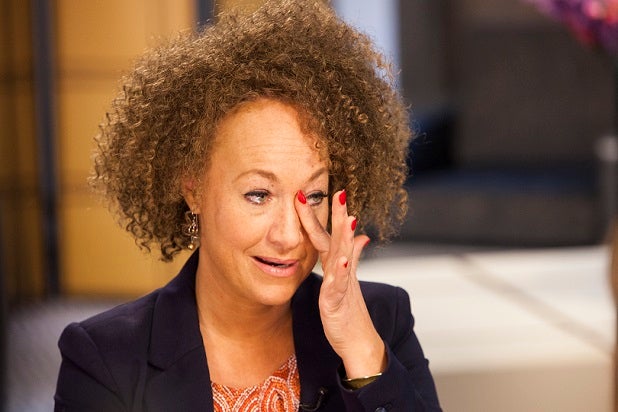 Rachel Dolezal, the embattled former president of the Spokane, Washington, chapter of the NAACP, spoke to NBC News on Tuesday to declare, among other things, that there’s “no biological proof” that Larry and Ruthanne Dolezal are her actual birth parents.

Asked by Savannah Guthrie whether she understands why people would be confused about her heritage, given that her parents are white, Dolezal said, “I can understand that.  But again, up to this point, I know who raised me. I haven’t had a DNA test. There’s been no biological proof that Larry and Ruthanne are my biological parents.”

Reminded by Guthrie that there’s a birth certificate listing Larry and Ruthanne as her parents, Dolezal responded, “I’m not necessarily saying that I can prove they’re not. But I don’t know that I can actually prove they are. I mean, the birth certificate is issued a month and a half after I’m born. And certainly there were no medical witnesses to my birth.”

Dolezal, who resigned her position with the NAACP this week amid growing questions about her background, has taken heat in recent days due to accusations that she’s been untruthful about her race. She appeared on NBC’s “Today” on Tuesday morning and revealed that she identifies as black, even though childhood photos seem to indicate that she was born a Caucasian.

Asked by Guthrie whether she’s done anything to change her physical appearance, Dolezal said, “I have experimented with my hair,” but denied having received melanin treatments.

“I haven’t had surgeries or anything like that,” Dolezal said, adding, “Some days if, you know, I might — if I have spray-on, you know, like bronzer or whatever, you got glow. But other days I don’t.”

Dolezal also maintained that she is “more black than white.”

“Well, I definitely am not white.  Nothing about being white describes who I am. So, what’s the word for it?” Dolezal said. “The closest thing that I can come to is if — if you’re black or white, I’m black.  I’m more black than I am white.”

Additional excerpts of Guthrie’s interview will air on Wednesday’s episode of “Today.”

Watch the interview in the video.