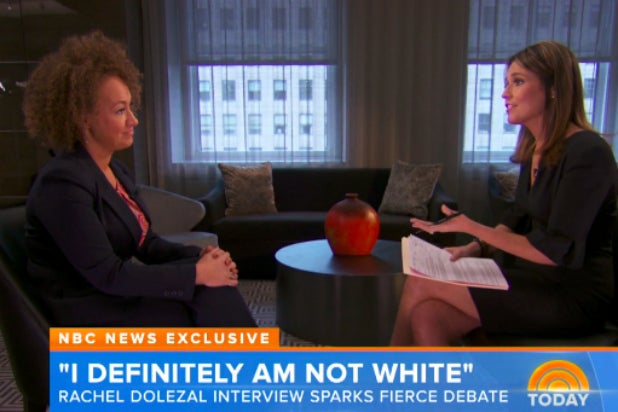 “Just yesterday, I finally had a chance to read Caitlyn Jenner’s piece in the magazine — and I cried,” Dolezal said on the Wednesday airing. “Because I resonated with some of the themes of isolation, of being misunderstood — to not know if you have a conversation with somebody, will that relationship then end because they have seen you as one way?”

“Even in dating relationships — I’m bisexual. And so, you know, I’ve dated men and women,” she continued. “And I will intentionally ask, like, ‘So do you just date light-skinned women? What’s your spectrum?”

And Dolezal is sticking with her personal racial identity — and at least most of her story.

“I definitely am not white. Nothing about being white describes who I am,” she told Guthrie earlier in their conversation. “I’m more black than I am white. That’s the accurate answer from my truth.”

While Dolezal didn’t quite admit to lying about her past, she told Guthrie “there have been moments of some level of creative nonfiction.”

“I have kind of had to explain or justify some of the timeline and logistics of my life in a way that made sense to others,” Dolezal explained.

Chief among those moments Dolezal is walking back from are her stories that she was whipped by her parents in South Africa and that she was born in a teepee.

“That is definitely a misrepresentation that I will own,” she told Guthrie. “Yes, I have never been to South Africa. And yeah, I wasn’t whipped. But I was physically abused.”

“I was not born in a teepee — that I know of. I actually don’t know where I was born,” Dolezal, who did not expand further on the physical abuse claims, concluded.