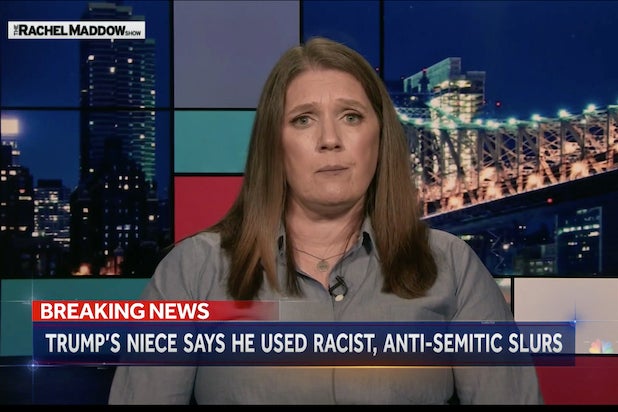 Rachel Maddow’s interview with Mary Trump paid off in a huge way, breaking records for her show and for MSNBC, as well as winning the night overall.

According to Nielsen, Thursday’s episode of “The Rachel Maddow Show” brought in a whopping 5.2 million viewers, making it the night’s highest-rated show in both total viewers and in the 25-54 demo. What’s more, it was not only Maddow’s highest-ever rated episode; according to MSNBC, it was also the most-watched regularly scheduled show in the network’s history.

The episode also had a strong tail; “The Last Word with Lawrence O’Donnell,” which airs immediately following “The Rachel Maddow Show,” saw 3.5 million viewers and was the No. 4 most-watched show of the night, its highest ranking ever.

Mary Trump was on to discuss “Too Much and Never Enough,” her best-selling book about her uncle, Donald Trump. Among the disclosures to come out of the wide-ranging interview, she said that she’s personally heard the president use racist and antisemitic slurs. In response, a White House spokesperson told NBC News that Trump “doesn’t use those words” and said Mary Trump’s book was full of “falsehoods.”

Maddow’s ratings win continues a very good year for the host, whose previous ratings record of 4.5 million viewers was set in January when she interviewed Lev Parnas.