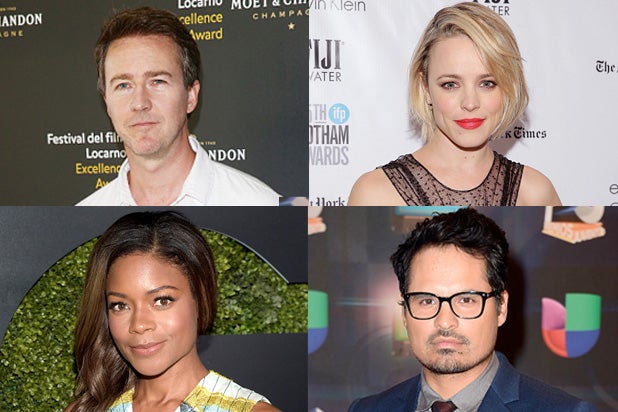 New Line and director David Frankel are pulling together a star-studded cast to join Will Smith and Helen Mirren in “Collateral Beauty,” as Edward Norton, Michael Pena and Naomie Harris are set to join the ensemble, while newly-anointed Oscar nominee Rachel McAdams is also in talks, multiple individuals familiar with the situation have told TheWrap.

New Line did not immediately respond to a request for comment.

Written by Allan Loeb, “Collateral Beauty” follows a New York advertising executive (Smith) who experiences a personal tragedy, so his colleagues try to come up with a plan to get him out of his funk. It works, but in a different way than imagined.

PalmStar CEO Kevin Frakes and Anthony Bregman are producing with Loeb and Anonymous Content’s Bard Dorros and Michael Sugar, the latter of whom received an Oscar nomination earlier Thursday as a producer on “Spotlight.”

New Line acquired the rights to the PalmStar and Likely Story project in September. Production is expected to start next month in New York.

McAdams is in the midst of shooting Marvel’s “Doctor Strange,” after which she would segue to “Collateral Beauty,” if her deal closes. She’s represented by WME and Magnolia Entertainment.

Norton, who recently starred in “Birdman,” will soon be heard among the voice cast of Seth Rogen and Evan Goldberg‘s animated comedy “Sausage Party.” He’s repped by UTA.

Pena, who recently starred in Marvel’s “Ant-Man” as well as Ridley Scott‘s “The Martian,” is repped by CAA and Management 360.

Harris, who was last seen in “Spectre” and “Southpaw,” next stars in “Our Kind of Traitor.” She’s repped by WME and Untitled Entertainment.