She’s back! Sportscaster Rachel Nichols is set to return to ESPN after almost three years at CNN with the launch of new NBA talk show “The Jump” on Thursday, Feb. 18, following the All-Star break.

“‘The Jump’ is going to be a great big conversation about all the fun, serious, smart, crazy, big-issue, small-smile moments that make the NBA so fascinating,” Nichols, 42, said Wednesday.

Nichols is officially back on board at ESPN on Feb. 1 after a detour at CNN and Turner Sports starting in October 2013. Her show “Unguarded with Rachel Nichols” was canceled after one year as part of a company restructure, however Rachel continued to be a key member of CNN’s sports team as an anchor/reporter both in the studio and on the sidelines.

She had previously worked at ESPN from 2004 to 2013 as a New York-based reporter and is excited to be going home, she told TheWrap. “It feels really great, when you start a new job there’s usually a mystery about the place, but a lot of the staff are old friends so I am back with people I like and respect.”

One big change will be that Nichols will now be based on the West Coast at ESPN’s studio at L.A. Live, which is conveniently located adjacent to Staples Center.

How will “The Jump” differ from other ESPN basketball shows such as “NBA Countdown” or “NBA Tonight”?

Those shows are very specific to the time they air after the games — we are in a different [afternoon] time-slot and a different position. We are going to be more of a big conversation, rather than a highlights show. The NBA provides a ton of sports-specific topics like amazing slam dunks or who should be on the All-Star team, but it also lends itself to the bigger picture such as gun violence, what it means for a sports league to be involved in that debate, and are the players willing to take on that burden?

Also Read: How the NBA Stole Christmas: 'Fans Expect to See the Best and Biggest Games' 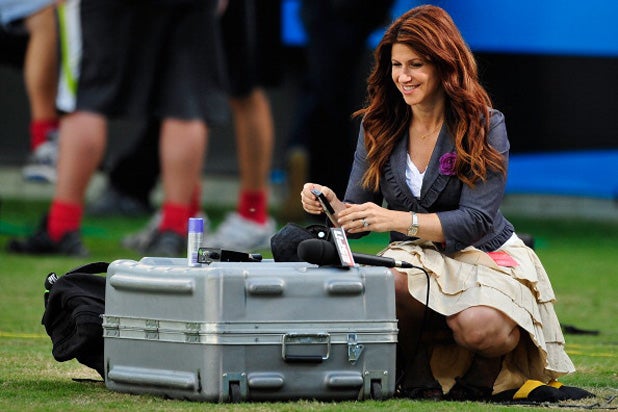 You have famously stood up to NFL commissioner Roger Goodell over issues such as Deflategate and the Ray Rice scandal. How is it between you two now?
Nothing is personal between Roger Goodell and me. I actually think he is smart and interesting, but there are questions you have to ask. The NFL has to understand that fans want to know the answers to things like how they handle the domestic abuse issue. Why are they taking one of their most famous MVPs [Tom Brady] to court? You can’t treat those questions as silly — that’s what I want to bring to the surface.

The latest NFL controversy is the long-term damage from head injuries. What are your thoughts on how the league is handling it?
Concussions are a difficult issue, and not as flashy and headline-grabbing as Deflategate or Rice’s elevator assault, but they may have a deeper effect on the NFL and impact whether people let their kids play football in the future or not. There are so many towns in America that focus their Friday nights on the local high school football game. Maybe long-term they will pick a different sport — and the NFL may have to make major changes.

There are players of all stages of their career — currently, recently retired and veterans — who are taking a hard look at their health. I think the NFL needs to address it, they will tell you that they made rule changes — but is it enough? Could there be more research? I don’t think anyone has the answer yet.