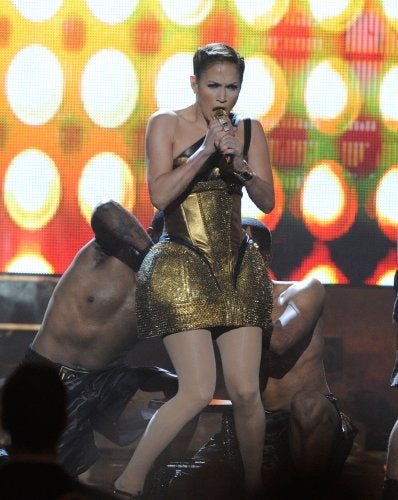 Jennifer Lopez sitting on a motorcycle in a short skirt. J-Lo standing in front of a mirror in her underwear. J-Lo arguing with her mom.
These are some of the highlights purportedly contained in 11 hours of home-videos taken by Lopez’s husbeen Ojani Noa, whose February-January marriage to the singer ended in 1998.
Why, you ask, will this footage blow off real news from TV screens this week?
Because Lopez is trying to block the videos’ release to the public by Noa and his collaborator, filmmaker Ed Meyer.
And because, well, they almost sound like sex tapes. (Noa has said the tapes, which include scenes from the couple’s honeymoon, are not sexual in nature and even the National Enquirer would only go so far to describe them as “naughty” and “racy” – implying no money shots.)
Nevertheless, Lopez’s attorneys filed a $10 million lawsuit against Noa. They also obtained a temporary restraining order blocking Noa and Meyer, who wish to incorporate the footage into a commercial film about Lopez, from making the videos public. Lopez is trying to get the restraining order made permanent.
No problem, says Meyer, who last week issued a statement that he would simply admit them into evidence this Tuesday in Judge James Chalfant’s civil courtroom as part of a $100 million countersuit.
"I believe,” Meyer wrote, “that I have an unalienable First Amendment right to enter the JLo home videos into the public court record, so as to defend myself. If Judge Chalfant has a problem with this, he can have me hauled out of the courtroom in handcuffs in front of the world media."