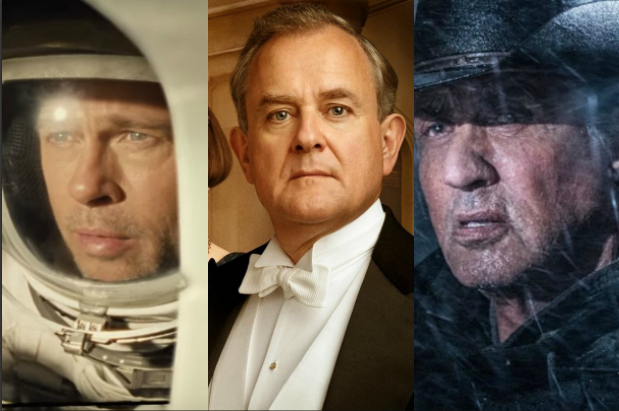 “Downton Abbey,” the movie adaptation of the popular ITV and PBS series, made $2.1 million at the Thursday box office from 2,800 theaters. It opens in 3,076 theaters this weekend.

The film from Focus Features edged out both Lionsgate and Millennium’s “Rambo: Last Blood” and “Ad Astra” from 20th Century Fox and Disney. All three films are in a tight race this weekend as the top new opener at the box office, with all three projected between roughly $16-24 million. And they have to contend with the still strong “It Chapter Two” and “Hustlers.”

“Downton Abbey” already made $2.2 million in early sneak preview screenings, and the film opened last week internationally, where it has made $11.7 million across 17 markets. In the U.K. where the film is set, it earned the No. 1 spot and opened to $6.3 million. The Thursday preview brings its cumulative total to roughly $4.5 million domestically.

“Downton Abbey” is Focus Features’ widest release since “Atomic Blonde” in 2017. While they’re drastically different films, that movie earned $1.5 million in previews and opened to $18 million. Tracking suggests that “Downton Abbey” will open between $16-20 million this weekend against a budget of approximately $13 million. It currently has a score of 85% on Rotten Tomatoes.

Based on Julian Fellowes’s hit series, “Downton Abbey” sees the return of the show’s original cast led by Hugh Bonneville, Maggie Smith, Elizabeth McGovern and Michelle Dockery as the residents and servants of the famed English manor prepare for a visit from King George V. Michael Engler directs from a script by Fellowes.

“Rambo: Last Blood,” the fifth and final “Rambo” film for Sylvester Stallone, made $1.3 million from just under 2,900 locations. It opens on 3,618 screens this weekend.

The studio is projecting “Last Blood” to earn between $17-20 million, with independent trackers saying it is likely to top out at $24 million. That would be enough to be the largest opening for any Rambo movie, with 2008’s “Rambo” opening to only $18 million. Last year’s reboot of “The Predator” opened to $25 million after earning $2.5 million in Thursday previews. For another recent comp, Millennium’s “Angel Has Fallen” made $1.5 million in previews and opened to $21.3 million.

Adrian Grunberg directed the film based on a story by Stallone, who also co-wrote the screenplay with Matthew Cirulnick. The film is set four decades after “First Blood” and finds John Rambo confronting his past and unearthing his old weapons and combat skills as he’s hunted at his home and seeks revenge in one final mission.

Finally, “Ad Astra” which stars Brad Pitt from director James Gray, actually came in second place Thursday and launched to $1.5 million at the Thursday box office. It opens on 3,450 screens this weekend, including 380 screens in IMAX, 340 premium large format screens and 130 D-Box/4D locations.

Also Read: 'Ad Astra' Film Review: Brad Pitt Journeys to the Edge of Space and the Depths of His Character's Soul

While the Fox release is in the same ballpark as the other three titles, projected to earn between $18-20 million in its opening weekend, it’s against a much higher budget of roughly $80 million. For comparison, “First Man,” another more melancholy astronaut film with an A-list star in Ryan Gosling, sputtered to only $1.1 million at the Thursday box office last fall on its way to a $16 million opening. Another critically acclaimed sci-fi, “Arrival,” opened to $24 million in 2016 against a $1.5 million Thursday launch.

“Ad Astra” is a paranoid thriller in space that follows Roy McBride (Pitt) on a mission across an unforgiving solar system to uncover the truth about his missing father and his doomed expedition that now, 30 years later, threatens the universe. The film also stars Tommy Lee Jones, Liv Tyler, Ruth Negga and Donald Sutherland in the film directed and written by James Gray that currently has an 81% on Rotten Tomatoes.