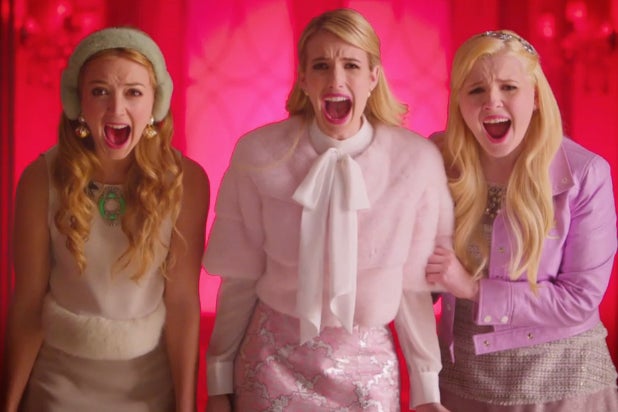 Hell Week takes on a new meaning for the characters of Fox’s “Scream Queens,” which features a red-masked serial killer terrorizing a college campus and picking off sorority and fraternity members one by one.

The mean girl clique at the center of the Kappa Kappa Tau sorority, the misfits who decide to pledge during the worst year ever, the dean of the university, a few fraternity brothers and a more-competent-than-usual campus security guard are all central players, but who will end up surviving the bloodbath?

Jamie Lee Curtis as Dean Cathy Munsch
As the matriarch of the bunch and her real-life counterpart the quintessential scream queen, we expect Curtis’ character to survive the whole ordeal of the show’s first 15-episode season. Murphy has already hinted there will be more seasons, and she seems like the perfect bridge to a new killer and a new group of victims should there be a Season 2.

Skyler Samuels as Grace Gardner
As the leader of the “outsiders,” Samuels’ Grace, an independent freshman KKT pledge, has Final Girl written all over her. She’s your best bet to survive not just the first episode, but the whole season as well.

Emma Roberts as Chanel Oberlin
Such a mean girl she named her clique after herself, Roberts’ Chanel Oberlin will likely be that character that audiences would love to see get killed off in some gruesome fashion. Which means she’ll likely stick around for a while, both to drag out the longing and perhaps for some redemption as well.

Keke Palmer as Zayday Williams
A focused scholarship student who also “knows how to have good clean fun,” Palmer’s KKT pledge Zayday seems resourceful and no-nonsense enough that we have faith she’ll outsmart the killer for the majority of the season. But she’s the best friend of Grace, and a place in the finale seems reserved for Grace, so Zayday may see her end just before the very end.

Diego Boneta as Pete Diller
An investigative reporter with the school paper who forms a fast connection with Grace, Boneta’s character, who also hates the Greek system, seems poised to last for a while, especially as more people start dying and he’ll likely have to put his investigative skills to the test.

Glen Powell as Chad Radwell
He’s the first male cast member to appear during the show’s opening credits, but Powell’s Chad probably has less chance of surviving than Diego Boneta‘s character Pete, who seems like the nice guy destined to romance the leading lady. The abrasive, popular frat brother? Probably a gruesome death in his future, though he may just be lucky enough to not get there for a while.

Billie Lourd as Chanel #3 and Abigail Breslin as Chanel #5
They’ll be the last two surviving of the numerically ranked Chanels, but it seems doubtful they’ll make it all the way to the end. Which one will die first is a toss-up, though perhaps Breslin has an edge, being a slightly more well-known star.

Lucien Laviscount as Earl Grey
The actor describes his character as a bit mysterious, which kind of seems to indicate he could be a contender to be behind the mask of the Red Devil. To really make him seem like a likely killer, though, he’ll have to stick around for a while.

Lea Michele as Hester
With that iconic neck brace, we’re fully expecting some kind of sorority makeover for Michele’s KKT pledge character Hester at some point. To get there, she’ll have to survive, at least for a while.

Oliver Hudson as Wes Gardner
As a single dad who drops his only daughter off at college for the first time, Hudson’s character probably won’t cross paths too often with the Red Devil. But what better way to really raise the stakes for our likely Final Girl Grace than to off her dad?

Niecy Nash as Denise Hemphill
Law enforcement never have very good luck in these masked serial killer situations, especially the bumbling, ineffectual ones. But Nash has promised her character is different, and will be making all the right decisions. However, being a protective barrier in front of the girls would seem to make her a high target for the killer, and probably doesn’t give her very good odds.

Nasim Pedrad as Gigi Caldwell
At least one authority figure has to die early on, and with the Dean likely to survive it all and Denise with more of a tangible journey ahead of her, Pedrad’s Gigi, a KKT alum and kooky lawyer, is our pick for the first of the grown-ups to go.

Nick Jonas as Boone
Jonas was cast in a “recurring” capacity, and the show already has several male cast members as series regulars. Plus, the former boy bander’s schedule as a series regular on DirecTV drama “Kingdom” probably means he won’t have much time to film this series. Murphy has said the show’s second episode will focus on the fraternity side of Greek life, and Boone seems the likeliest to bite it first on the guys’ side.

Ariana Grande as Chanel #2
There’s been one too many promos featuring Chanels #3 and #5 flanking their leader to suggest Grande’s #2 mean girl is long for this world. She’s a big star, so it would be a big kill for our Red Devil. From the show’s own trailer, we seem to know the first victim is a poor pledge buried up to her neck on the sorority’s front lawn, but Chanel #2 seems poised to be the first to be killed of the main cast. Casting Charisma Carpenter to play her mom doesn’t help her odds.

“Scream Queens” premieres with a two-hour episode on Tuesday, Sept. 22 at 8 p.m. on Fox.