Sophie Okonedo is nominated for the Best Drama Guest Actress Emmy this year, for her role – or roles, really – in Netflix’s “Ratched” as Charlotte Wells, a mental institution patient being treated for dissociative identity disorder. Her personalities include Ondine, a braggadocios musician who claims to be a very accomplished violinist, Apollo, an Olympic gold medalist and Baby Taffy, a young, vulnerable child who acts as the caretaker to her sick mom.

“I made each character a whole person, as if I was only playing that one person,” Okonedo said. “When I played Ondine, I really understood her life, where she was going, what her aspirations were, what made her happy, what her pain was. I wanted to know all the things about her, but the challenge in this was to go very quickly from one [personality] to another and completely dropping the other person, sometimes midsentence.”

Okonedo’s character goes through several psychotic breaks, including one that results in her developing a fourth personality in which she takes on the persona of the doctor who has been treating her. But Okonedo says she didn’t really prepare for these scenes or prepare to slip into another personality but rather, “went for it, like jumping off a cliff” as soon as she heard “action.” 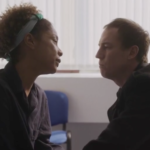 Also Read:
‘Modern Love': Sophie Okonedo on Quarantining with Tobias Menzies and Her Most Challenging Scene

“I just knew each character and went on to the next person,” Okonedo said. “I didn’t really practice how that was going to go. I just knew the scene inside out and within one line, I was in the body of the next person. In a way, it’s kind of what I do anyway because I inhabit different characters – or they inhabit me, really – so it was an extension of what I’m already doing.”

Rather than working intellectually, Okonedo explained her more physical approach to acting, specifically when taking on multiple roles in “Ratched.”

“Each personality had a very different rhythm, and I tend to work inside my body,” Okonedo said. “Once I feel like I’m inside my body – of course, you’re always inside your body, but once I feel that – that’s the best guide when I’m guiding, rather than using my head too much. Too much thinking is not great.”

The 73rd Emmy Awards will air live on Sep. 19 at 8 p.m. ET on CBS and will stream live and on demand on Paramount+. 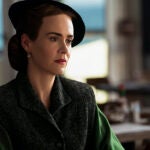