Busy, loud and fast-paced, the animated video-game adaptation “Ratchet & Clank” — based on the Insomniac Games series pitting a crafty cat-like mechanic and a diminutive robot against a megalomaniacal villain — takes the PlayStation controls out of the gamer’s hands in search of all-scripted, feature-sized pizzazz for an interactive title that’s been around since the start of this century.

As second-tier CG-styled animations go, this origin-retelling diversion from director Kevin Munroe (“Dylan Dog: Dead of Night”) is a serviceable action-and-humor-crammed space hero saga for kids. But as is usually the case with carefully engineered franchise movies with a reputation to uphold, it also feels thoroughly mechanical, as if it should come with the type of amusement-park announcement that departing moviegoers should exit to the right, so the next group can take their seats from the left.

The story’s hero is Ratchet (voiced by James Arnold Taylor), a scrappy feline biped known in this fictional universe as a lombax, who soups up space vehicles in a garage with his pal and mentor Grimroth (John Goodman). Ratchet dreams of joining a group of superhero defenders known as the Galactic Rangers, headed by his idol, a preening, chisel-jawed narcissist called Captain Quark (Jim Ward).

Ratchet gets his chance when one of his tricked-out cruisers helps the Rangers foil a coordinated robot attack initiated by an evil corporate head named Drek (Paul Giamatti), whose been on a planet-destroying spree as part of a foul scheme to build one of his own. Along the way, the gung-ho Ratchet joins forces with a conscience-driven, undersized reject from Drek’s war-robot assembly line, a bucket of bolts called Clank (David Kaye). 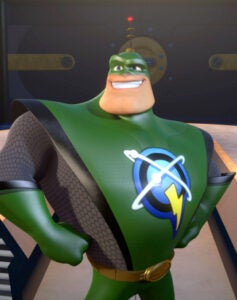 As the newest member of the peacekeeping Rangers, Ratchet finds support from a pair of the squad’s human females, fierce warrior Cora (Bella Thorne) and self-proclaimed nerd (yet still rendered sexily) Elaris (Rosario Dawson). Drek, meanwhile, is aided by his thudding enforcer Victor (Sylvester Stallone), a hulking robot with an underbite, as well as the green, alien-looking Dr. Nefarious (Armin Shimerman), who prefers “vengeful” to “mad” as a descriptor for “scientist.”

Crammed in between bursts of action with an assortment of weapons — one of the game‘s hallmarks — are jokey, self-referential nods to, and parodic riffs on, the tropes of science fiction, superheroes, and megavillains. But the screenplay by T.J. Fixman (a writer of several of the original Ratchet & Clank games), director Munroe, and Gerry Swallow (“Ice Age: The Meltdown”) is never as richly funny as others in this vein, be they “The Incredibles,” or the prankishly satirical “Spaceballs,” or even the playfully goofy “Despicable Me” movies. (One of the funniest gags is less genre-spoofy and more contemporary, having to do with an exasperated Drek’s phone-addicted subordinates.)

The winking, if rarely clever, asides act more as smile-inducing filler, invariably to keep a parent from drifting off. But there are a few pleasures, namely Ward’s cheesy, puffed-up baritone — the image-obsessed Quark, who gets the majority of the silliest lines, becomes a key figure in the movie’s lesson about the pitfalls of hero worship — and Giamatti’s reliably seething tyrant turn.

Also Read: Who Cares About Realism In Video Games Anyway? 'Dirt Rally' Does

What’s invariably all too true about movies like “Ratchet & Clank” is that the titular protagonists are ultimately pretty dull as figures to root for when stripped of their home avatar status. In this case, solving the character development hole that game-to-multiplex adaptations requires comes across as an uphill battle for the filmmakers, with a solution that can be read as: faster, louder, busier.

Ratchet’s scrappy, impetuous spirit may be what you’d expect in an underdog hero, but his personality is lost in the usual warp-speed narrative of chases, melees and the next peril. Clank, on the other hand, plays like a ho-hum cross between Mr. Spock and C-3PO, a logic-minded sidekick with an English-accented lilt but missing a central droid-y charm. (The winningly emotional blurps and bloops of R2D2 remain an unmatched industry standard.)

Visually, “Ratchet & Clank” has its appeal. The CGI environments surrounding this duo are skillfully designed, with plenty of attractively majestic and atmospherically lit galaxyscapes, imposing military bots, and foreboding spaceship interiors. But the story is ultimately too predictable and forgettable to make “Ratchet & Clank” anything but a kid-targeted holdover between slavishly awaited tentpole behemoths from the comic book world.