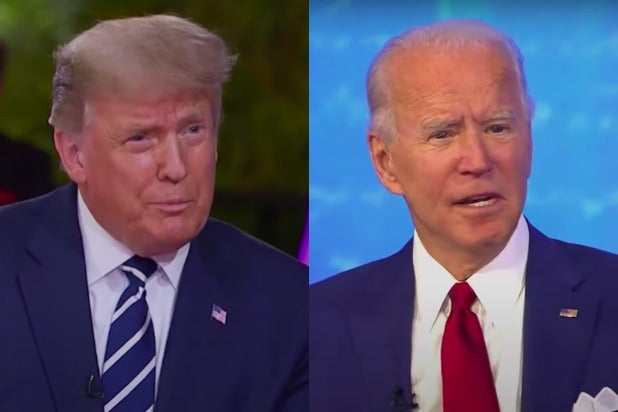 NBC’s broadcast channel drew 10.9 million total viewers, MSNBC added 1.8 million and CNBC chipped in with 720,000 viewers. But the simulcast was not enough to topple Biden on ABC alone.

Updated at 10:43 a.m. PT: We now have some updated Nielsen numbers for Thursday’s dueling Biden-Trump town halls, including early ratings for Trump’s on MSNBC and CNBC. Even with the cable channels counted for the Trump simulcast, Biden is still in first place with an average of 13.9 million viewers vs. Trump’s 13.1 million viewers.

Currently, from 8-9 p.m., Trump is averaging 10.7 million total viewers from NBC, 1.7 million on MSNBC and 671,000 on CNBC, according to Nielsen. Biden’s 13.9 million total-viewer average from the same, comparable head-to-head hour is all from ABC, the only network his town hall aired on.

We are still awaiting final, time zone-adjusted Nielsen numbers for both town halls. We expect those numbers and streaming data around 1 p.m. PT today.

Previously:
And the (ratings) battle of the Thursday town halls goes to…former Vice President Joe Biden and ABC! For now, at least.

Including the full 9 o’clock hour for Biden, the ABC event’s viewership average was 12.2 million.

The Trump town hall aired on NBC and was simulcast on NBCU cable channels MSNBC and CNBC. Trump was live coast-to-coast on cable, but waited for 8 p.m. PT for west-coasters. A few NBC affiliates in the Mountain and Pacific time zones may have elected to air Trump live.

The Biden town hall aired live coast-to-coast on ABC (and only ABC), which makes the above Nielsen numbers subject to significant adjustment for that network.

We’ll get the cable ratings — and final Nielsen figures, which will be adjusted for time zone differences and include out-of-home viewing and streaming numbers — later today.

To make things even less apples-to-apples, while both town halls started at 8 p.m. ET, Biden’s ran longer. While Trump’s event ended at 9 p.m. ET, Biden continued with moderator George Stephanopoulos until about 9:30 p.m. ET. The former vice president of the United States then stuck around answering questions from the sparse audience, though ABC News’ analysis ran over that audio.

NBC’s Oct. 5 Biden town hall initially drew 3.8 million viewers, according to the early, comparable (to our above numbers) data set from Nielsen.

In final, adjusted numbers that also — and more importantly — lumped in cable channels MSNBC (2.7 million) and CNBC (171,000), the Oct. 5 Biden town hall jumped to 6.7 million viewers, making the simulcast the most-watched town hall of the 2020 cycle.

Prior to Thursday, Trump’s lone town hall audience came in at 4 million viewers Sept. 15 on ABC, according to Nielsen. That broadcast-only number was better than Biden’s Oct. 5 NBC-only haul of 3.9 million viewers, which goes to show the power of a simulcast.

ABC, which is owned by Disney, does not really have cable channels that would make sense for a news programming simulcast. (We’re looking at you, ESPN and Freeform.)

In addition to his two thus far this October, Biden has had eight — yes, eight — other town halls in the past year or so. All have aired solely on CNN.

Check back with TheWrap later today for final Nielsen numbers from both town halls.