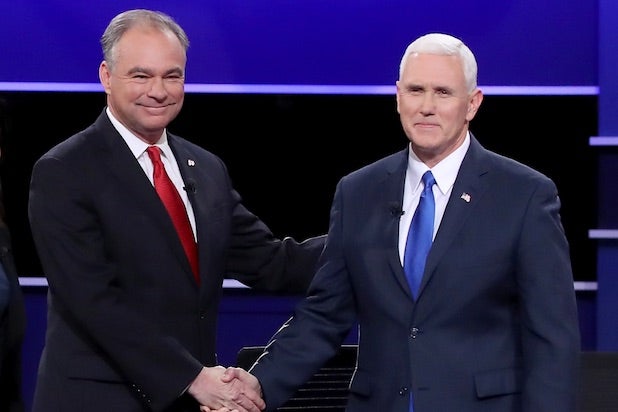 Though nothing to get too braggadocious about — especially in light of the record-breaking 84 million viewers that Hillary Clinton and Donald Trump drew for their first debate a week ago — that sum does rank better than those of two other VP matchups: Al Gore vs. Jack Kemp in 1996 (26.6 million) and Dick Cheney vs. Joe Lieberman in 2000 (29 million).

NBC averaged 7 million viewers, while CBS finished second among broadcast networks with 6.46 million and ABC was third with 6.14 million. Among the key news demo of adults age 25-54, NBC finished first with 2.95 million viewers while CBS and ABC fell below the 2 million mark.

When it comes to cable, CNN and Fox News can both claim victories. CNN won the key demo among cable networks, with 1.68 million viewers. However, Fox News averaged 6 million total viewers to dominate cable and stay on par with CBS and ABC’s broadcast coverage.

The 35.6 million total does not include PBS, C-Span or Internet live streams, which presumably would add to the veep debate total significantly.

The next presidential debates are scheduled for October 9 in St. Louis and October 19 in Las Vegas.