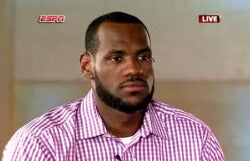 America was transfixed by the spectacle of NBA star LeBron James' free-agency decision special on ESPN Thursday night, the 75-minute-long show was the top TV program of the night.

KING JAMES LeBron's decision generated an overall metered market rating of 7.3 for ESPN from 9-10:15 p.m. Eastern time. That's the top households rating for non-NFL programming on ESPN this year. Ratings for the special peaked at 9.6 during the second 15 minutes of the show when the news was actually revealed. ESPN had promised that LeBron would make his announcement in the first 15 minutes of the special, but it apparently broke that pledge in favor of grabbing some extra eyeballs.

CLEVELAND ROCKED Fans in LeBron's current home state of Ohio turned out in droves to watch their star player leave them for Miami. The top two local markets for ESPN's LeBron decision special were Cleveland and Columbus; Miami came in third. "The Decision" got a 26.0 metered market rating in Cleveland, meaning more than a quarter of the city's residents watched LeBron break their hearts on live TV.

SQUEAKING BY Overall, CBS won Thursday night by the slimmest of margins. CBS posted an average 1.8 rating/6 share in the key adults 18-49 demographic, slightly higher than ABC and Fox, tied at 1.7/5. CBS earned the win thanks to the premiere of the 12th edition of the Orwellian reality show "Big Brother," which scored a 2.4/9. "Big Brother" was up 4 percent over last year's premiere.