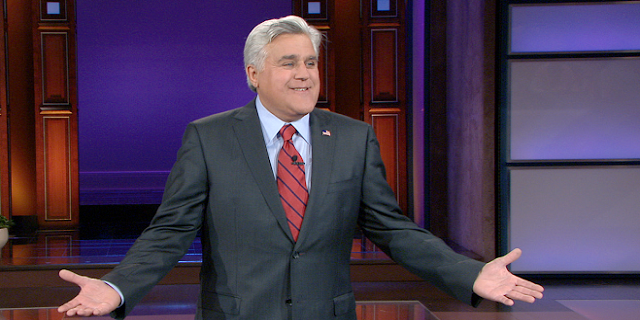 Jay Leno might be on his way out at "The Tonight Show" — but he's leaving his network a nice parting gift.

With numbers in for this year's May sweeps period, Leno's "Tonight" has widened his lead over his competitors David Letterman and Jimmy Kimmel, posting impressive advances over the same period last year.

Also read: 'GMA' Beats 'Today' in May Sweeps for First Time in 19 Years

During this year's May sweeps, "The Tonight Show With Jay Leno" posted a 39 percent lead over "Late Show With David Letterman" in the advertiser-cherished 18-49 demographic — the widest May sweep margin over "Late Show" since 2004, and a 12 percent increase over last year's May sweep. "Tonight" averaged 1.075 million viewers in the demographic over the April 25-May 22 sweep period, versus 775,000 for CBS's "Late Show."

In total viewers, Leno also widened the lead over Letterman compared to last year, averaging 3.515 million versus 2.767 million for Letterman. That's a 27 percent advantage, up 16 percent from last May.

NBC's "Late Night With Jimmy Fallon" also fared well, also widening its lead over its CBS competitor, "Late Late Show With Craig Ferguson." For this year's May sweeps, Fallon — who's set to inherit Leno's "Tonight Show" hosting position — beat out Ferguson by 38 percent in the demo, compared to last May's 25 percent, and by 27 percent in total viewers, compared to 15 percent last May.

While Kimmel lost ground to Leno, there was good news for ABC.

The May 2013 sweeps saw "Live" come out ahead of "The Late Show With David Letterman" in the key demo by 8 percent — the first time that Kimmel has beat Letterman in any sweep period.

And, depending on how you slice it, ABC took most-watched status for the late-night May sweeps. Overall, "Kimmel" and "Nightline" at 12:35 came out of the May sweeps as the most watched late-night roster — as it did last May, averaging 2,238,000 total viewers compared to CBS's 2,094,000 and NBC's 2,223,000. That comparison, however, is a bit apples to oranges — ABC's late-night slate runs until 1 a.m., compared to 1:35 for CBS and 2:05 a.m. for NBC. For instance, NBC's late-night roster includes "Last Call With Carson Daly," which brings down the network's late-night average considerably. (During the May 2013 sweep, "Last Call" averaged 0.9 million total viewers.)