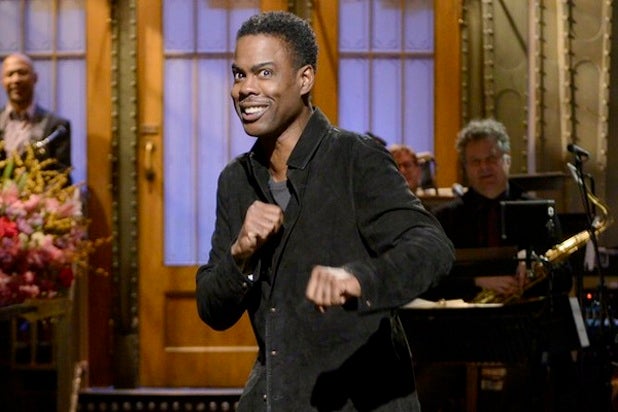 Chris Rock and Prince were a winning combination for NBC’s “Saturday Night Live.”

Saturday’s episode averaged a 4.9 rating/12 share in household results in Nielsen’s 56 metered markets and a 2.4/10 in the advertiser-coveted Adults 18-49 demographic in the 25 markets with local people meters according to Nielsen’s preliminary numbers.

That makes it the highest-rated episode of the 40th season so far. For comparison, season-opener Chris Pratt and musical guest Ariana Grande’s episode on Sept. 27 averaged a 4.0/10 in household results and a 2.1/10 in the key demo.

Rock’s episode is the highest-rated in metered-market households since Feb. 1 when Melissa McCarthy hosted with musical guest Imagine Dragons earned a 5.4/13.

In the ad demo in the Local People Meters, this is the highest-rated “SNL” since March 1 when Jim Parsons hosted with musical guest Beck earned a 2.4/11 and ties February’s McCarthy episode, which earned a 2.9/12.

“Saturday Night Live” also ranked as the No. 1 telecast of the night on ABC, CBS, NBC and Fox in both metered-market households and the key demo in the Local People Meters, outscoring all primetime programs on those networks in both measures.

These overnight numbers are preliminary as final numbers will be released on Thursday.

Rock’s episode featured the return of the “How’s He Doing?” segment, which jokes about President Barack Obama’s support among black voters. It also included a spoof on singer Taylor Swift‘s popularity and a “Shark Tank” parody in which ISIS appeared on the ABC investor show. Meanwhile, Prince performed an eight-minute set, the first of its kind for the sketch show.