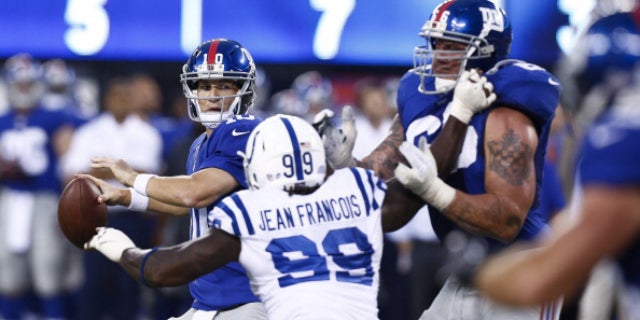 America chose preseason football over a murder mystery season finale as Fox took on all comers with a Giants game.

Fox was first in ratings with a 1.9 rating/6 share in the advertiser-coveted 18-49 demographic and second in total viewers with an average of 5.7 million, according to preliminary numbers. The Colts/Giants NFL game beginning at 7 p.m. earned those numbers, but due to the nature of live sports, they are not final.

CBS, still blacked out in major markets by Time Warner Cable, was second in ratings with a 1.2/4 and first in total viewers with 6.3 million. Following a rerun, "Big Brother" at 8 earned a 2.0/6, making it the highest-rated show of the night. It had 6.5 million viewers. "Unforgettable" at 9 received a 1.1/3 and 6.4 million viewers. A repeat followed.

Univision was in fourth in ratings with a 0.7/2 and fifth in total viewers with 2 million.

NBC and Telemundo tied for fifth in ratings, each earning a 0.5/1. NBC was fourth in total viewers with 2.3 million, while Telemundo was sixth with 1.2 million. For NBC, after a repeat at 7, "Crossing Lines" at 9 received a 0.4/1 and 2.1 million viewers, a series low.