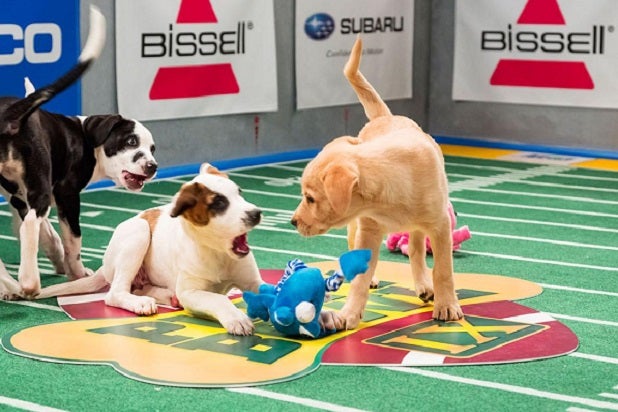 In further proof of dogs’ superiority over cats, Puppy Bowl XI trounced the rival Kitten Bowl in the ratings on Sunday, drawing more than twice as many viewers as its feline competition.

The initial showing of “Puppy Bowl,” which aired from 3 to 5 p.m. on Animal Planet, drew 2.8 million total viewers. That’s compared to the 1.3 million viewers that tuned in for the second annual installment of “Kitten Bowl” on Hallmark Channel from 12 to 3 p.m.

Still, the kitties did earn some bragging rights — the second installment of “Kitten Bowl” showed impressive growth over last year’s maiden faceoff, rising 28 percent in total viewer and 40 percent in the all-important (to humans, anyway) 18-49 demographic, drawing 394,000 viewers in the demo. And in social media, #KittenBowl and related Hallmark Channel terms were top Twitter trends for a number of hours on Sunday, with 50,000 tweets reaching nearly 36 million users.

“Puppy Bowl” did fairly well on the social media front too, generating 10 unique U.S. and Worldwide Trending Topics on Twitter.

Still, compared to the Super Bowl — which drew a record 114.4 million viewers on Sunday — the “Puppy Bowl” and “Kitten Bowl” are still both chasing their tails.