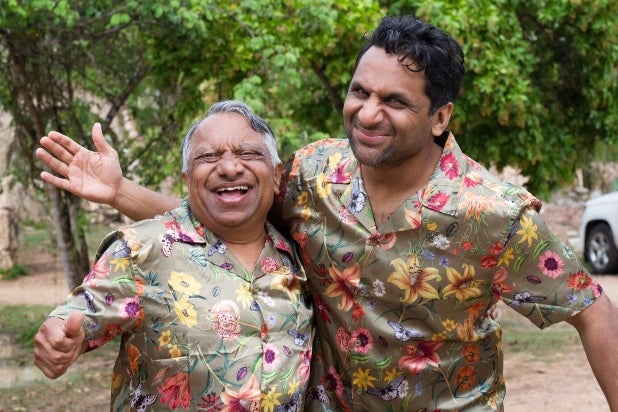 Ravi Patel got the idea for his new buddy-comedy travel docuseries, “Ravi Patel’s Pursuit of Happiness,” from a conversation with someone very close to him — a person who he talks to on a regular basis and with whom he shares his deepest, most personal thoughts and feelings. But that person is not his wife, a friend or even his mom or dad, though all of those people appear in the four-part show, out today on HBO Max.

That person is his therapist.

“It started with me just sitting down and thinking about, what are the big questions that I’m discussing in therapy right now?” Patel told TheWrap ahead of the series premiere. “Seriously. I love therapy.”

“We went through and talked about the themes that had come up over the last year, and one of them was getting on the other side of 40 and becoming a new father for the first time,” he continued. “It gave me this incredible appreciation for the love and obsession that parents have over their kids, and it gave me this new kind of empathy for my parents.”

Smash-cut to episode one, which finds Patel and his adorable parents, Champa and Vasant, on a trip to Mexico to check out a town heavily populated with wildly happy American retirees — and to contemplate what it means to live life to the fullest.

Over the show’s four episodes, Patel visits three other countries — Japan, South Korea, and Denmark — in order to explore and contemplate life’s biggest questions, each with a different companion at his side.

In Japan, Patel and his wife discuss parenting strategies against the backdrop of a culture so safe that six-year-old children are encouraged to go on errand runs to the supermarket unattended. In South Korea, he and his good friend, Omaze founder Matthew Pohlson, analyze the challenges of the elusive work-life balance and the mental-health consequences that came come from being over-worked. And finally, in Denmark, he and HBO’s “High Maintenance” star Abdullah Saeed explore the local attitudes behind what he calls one of the most “urgently American” dilemmas of our time — immigration.

Like Bourdain, Patel’s experience-based show finds him interviewing people from all different walks of life, political stances, and cultures.

“I’ve done so many things that have been canceled or haven’t gone anywhere, and I just am wiser now in the sense that I try not to focus on the outcome of all these work opportunities and instead I try to focus on just that I get to do it,” Patel said. “So I wanted to create a show that would change my life, or that I would love, even it was a failure on the outside. So that meant that every episode I didn’t want to be alone, I wanted to travel with people I love.”

Oh, and if after watching both “Pursuit and Happiness” and he and his sister Geeta’s 2014 film “Meet the Patels” you’ve become as big a fan of Champa and Vasant as you have of Patel himself, he’s got some exciting news to share.

“I guess this is a spoiler, but my parents are now opening their own retirement community in Charlotte for Indian retirees,” he said, divulging that, after much discussion in the Mexico episode, he and his wife have decided to leave Los Angeles and move East to be closer to them.

So, although it would be easy for Patel to come up with some big, profound takeaway about what he learned of the meaning of life while making the show, he says the truth is it would take at least 20 years to really know which moment hit him the hardest  — although that South Korean Death Cafe is certainly a contender.

All things considered, his goal was simply “for each episode to be a life-changing journey.”