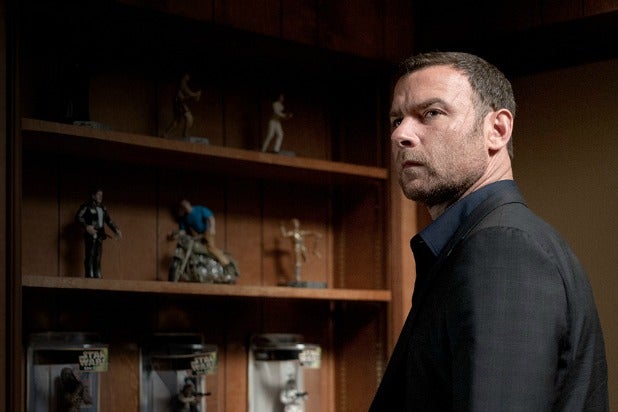 It’s rare when I feel so invested in a cable series that I’m offended by a single scene to a point of reacting as I am about to. Last night, Showtime’s magnificent series “Ray Donovan” showed a pit bull dead and tortured, infested with flies, hanging outside a white-trash hovel. I was offended to the core.

These are strange times. There isn’t a day that goes by where an image of a tortured animal jumps out of a seemingly well-meaning Facebook or Instagram post. The sickness is pervasive — individuals who feel they have to show the carnage of innocence in order to promote animal welfare do so only to get a reaction.

Linda Howard, an animal-rights activist and wife of the late SAG-AFTRA President Ken Howard, was also sickened. We spoke about it.

“As artists we have a responsibility to depict torture of innocent life in the proper context,” she told me. “I was appalled and disgusted to see the image in last night’s episode — a show that I have watched from its inception and never missed an episode.

“I remember when [‘Ray Donovan’ star] Liev Schreiber, many years ago in Malibu, happened to walk into a shop where I was with our Staffordshire terrier, Shadow,” she said. “Liev dropped to his knees and immediately started hugging Shadow, who hugged him right back. He mentioned to his friend, ‘You don’t understand, these are the greatest dogs,’ and I think I fell in love with Liev in that very second. Here was someone who knew and understood the inherent goodness in animals.”

Ken Howard was the national spokesman for the Onyx and Breezy Foundation, an organization that grants funding for animal rescues across the U.S. and to individuals whose hardships make caring for their animals financially impossible.

“Liev is such a good actor that it would have taken a split-second to register the disgust in his eyes,” said Linda, who has been an executive board member of Onyx and Breezy since 2007.

I know “Ray Donovan.” The simple act of cutting the dog down would have played well into Ray’s tortured existence since the death of his wife, Abby (Paula Malcolmson). A conscious act of contrition for all that’s gone down this season by his hand. The dog even reminded me of Abby’s dog.

Could the image of the dog, twisting at the end of the rope, covered in flies, be a metaphor for Abby, whose death was slow and malignant? Would the thump of the dog hitting the ground have brought his brother Terry (Eddie Marsan) running — aiding Ray in life as Terry aided Abby in death? Could he have taken a beat to stop and react? Then, it would mean something other than set dressing.

Animals are innocents not unlike children. I remember as a boy that I would cheer when a cowboy was shot and cry when a horse was shot. We have become jaded by stories of abuse, yet have a short memory.

Former NFL quarterback Michael Vick is back enjoying his livelihood with his involvement in an illegal dog-fighting ring just a memory. These were only animals. Aren’t we all?