It was supposed to be a disaster.

Instead, in the face of Late Night Crisis 2010, NBC U TV Entertainment chairman Jeff Gaspin successfully tamed a roomful of reporters who hadn’t been this out for blood since … well, since the last time Ben Silverman met with critics.

Of course, he was starting from ground zero.

Sunday was shaping up as the perfect storm of PR failure: Just as NBC’s late-night core was melting down, Gaspin was scheduled to face the Television Critics Association wolfpack for the first time since taking the job as programming chief. (Indeed, some had been comparing the last few days to NBC’s version of Katrina. "Heck of a job, Zuckie!" one quipped, referring to Gaspin’s boss, Jeff Zucker.)

It’s also far from certain the decision to screw over Conan O’Brien to keep Jay Leno on NBC will ultimately prove to be the right call. But by the time Gaspin’s candor offensive was over, the assembled masses of Zucker-loathing scribes saw a faint ray of hope that maybe NBC wasn’t dead and gone after all. 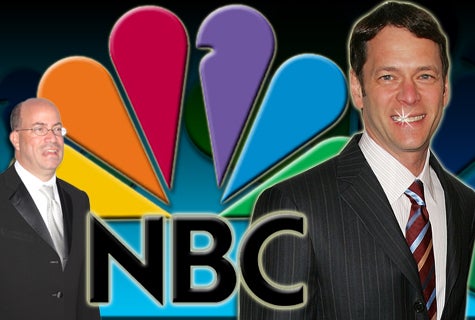 As for Gaspin personally? Think of Sunday as his first big audition for a much bigger job one day — like maybe replacing  Zucker as CEO at NBC U after Comcast takes over.

Yes, Gaspin was that good.

Headed into his session with reporters, the mood at NBC was grim. The last 72 hours has seen an almost unprecedented level of journalistic bile heaped on the network as the world reacted to the late-night meltdown.

Wags compared Jay at 10 to New Coke. Others wondered how the network could ever think replacing Jay Leno with Conan O’Brien could end in anything but failure.

If there’s one thing reporters and media pundits love, it’s reminding everyone how right they were. And NBC chief Jeff Zucker handed them a fat target by setting in motion of series of events that led to the worst possible outcome.

But just as the NBC-is-finished meme was starting to take hold among the media mavens and Twitterati of the world, Gaspin came in and halted the free-fall with a 40 minute command performance.

He was blunt. He started out by admitting what everyone already knew, rather than hide behind the "talks are ongoing" excuse.

He did clam up about some details, but mostly because he didn’t want to get into a pissing match with Team Conan. And yet, he wisely promised to tell all once everything is done — offering at least the hope of future transparency.

Gaspin was funny, joking that ad rates at 10 p.m. would go up — because NBC had done so much to lower them.

And most impressively, the Gaspin who was on stage Sunday was almost identical to the Gaspin known to those who’ve talked to him privately over the years. Like another brash NBC leader of the past, Don Ohlmeyer, what you see is what you get with Jeff Gaspin (but thankfully, without the chain-smoking).

Finally, and significantly, Gaspin made it clear from his demeanor and his words that the era of Bold Pronouncements and Empty Promises was over at NBC. The plans he outlined Sunday weren’t about changing TV or innovating new paradigms; he was simply trying to pull NBC back from the brink of oblivion.

"I just want to see some growth," he said.

That’s not to say that Gaspin’s session was a spin-free zone. He’s an adept politician after all, and not a bad salesman, either.

For example, while there’s ample evidence to suggest that a brewing affiliate revolt forced NBC to act sooner than it wanted, let’s face it: Local stations just sped up the process. They were a necessary scapegoat to cover what was a flawed decision from the start.

Everyone inside NBC, except perhaps Mr. Zucker, knew Jay at 10 was a failure– not just for affiliates, but for the network itself.

Sure, everyone hoped it might grow a bit in the coming months. Or get a summer bounce. But that was just midseason optimism. In their hearts, they knew Jay was wrong.

What made sense on a short-term financial basis didn’t work when you started realizing there was no backend potential in primetime Leno, no chance to grow new drama hits, and zero buzz about a lackluster hour nobody even wanted to TiVo.

There’s probably a part of Gaspin that would’ve loved to have said just that Sunday. Particularly since he had nothing to do with creating the mess he had to face last week.

But such an admission — that the whole idea of Leno at 10, or Conan on "Tonight" — would’ve been a bridge too far. It would’ve been a direct indictment of his boss, Jeff Zucker.

Instead, Gaspin was much smarter. He took the bullet himself.

He spoke plainly and (relatively) honesty about the situation at NBC. He made it clear he was changing course. And he was modest in his predictions of how successful his plan might be.

But most of all, he left those who cover NBC — and perhaps the boys who run Comcast — to draw their own conclusions about the Gaspin management style vs. that of other past (and current) NBC executives.

When it’s all over, it’s possible that Gaspin will have made the wrong call by putting in place a plan that could well lead to O’Brien bolting NBC. Those of us who’ve been unabashed Conan geeks since his opening night in 1993 certainly think so.

But at least Gaspin stepped up. He took command of an awful situation, didn’t put the blame on anyone else and made it clear he was responsible for what comes next.

That may be just what NBC needs if it’s ever going to recover from its decade of decline.