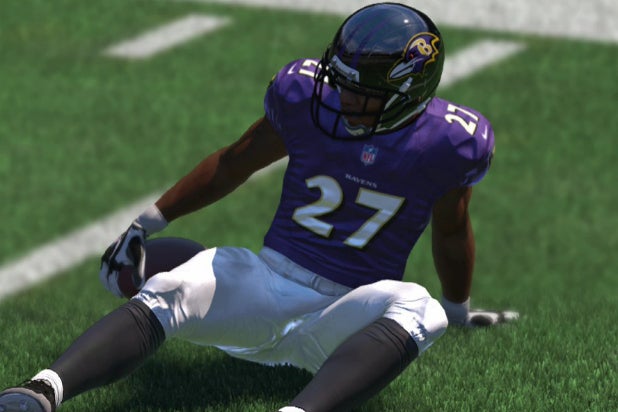 Ray Rice has been cut again — this time in the form of his video game doppleganger.

Also, Nike is tearing up Rice’s endorsement contract a day after he was released by the Baltimore Ravens and suspended indefinitely by the NFL, a Nike spokesman told TheWrap on Tuesday. The Associated Press first reported the decision by Nike.

“We don’t have a formal statement but can confirm he is no longer a Nike athlete,” the spokesman told TheWrap.

Also read: Ray Rice’s Wife Defends Suspended NFL Star, Who Knocked Her Out in an Elevator

On Monday, TMZ Sports released a graphic-but-grainy security video from February showing Rice and his now-wife Janay Palmer arguing in an elevator at the now-defunct Revel hotel in Atlantic City, N.J.

During a confrontation, the three-time All-Pro running back struck his then-fiancee with his left hand. She appeared to be knocked unconscious. Rice is seen moments later dragging her out of the elevator, with Palmer’s body still limp.

After the first video of the incident leaked, the NFL gave Rice a two-game suspension, claiming to have heard a description of what happened inside the elevator. The league claims it hadn’t seen the full camera footage until Monday. TMZ’s release of the full footage prompted the Ravens to cut Rice and the NFL to up his suspension.

The Ravens on Tuesday announced via Twitter that they’ll offer an exchange for Rice jerseys.

The Baltimore Ravens will offer an exchange for Ray Rice jerseys at stadium stores. Details to come.

On Tuesday morning, Rice told ESPN: “I have to be strong for my wife. She is so strong. We are in good spirits. We have a lot of people praying for us and we’ll continue to support each other. I have to be there for (Janay) and my family right now and work through this.”

Khalil Garriott contributed to this report.