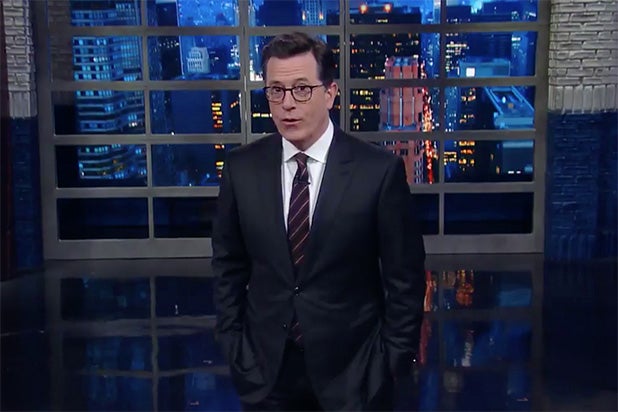 After being accused of homophobia this week for a joke that he made about President Donald Trump, Stephen Colbert has responded to the uproar, saying that he would tell the joke again, but would “change a few words that were cruder than they needed to be.”

Colbert drew charges of homophobia after ripping into Trump and declaring, “The only thing your mouth is good for is being Vladimir Putin’s cock holster” on Monday night’s episode of CBS’s “Late Show With Stephen Colbert.”

The joke drew criticism in both the media and on social media, with the hashtag #FireColbert gaining steam on Tuesday night.

Colbert delivered his response, which stopped short of an apology, during the top of Wednesday’s episode.

Read an advance transcript, obtained by TheWrap, of his response below.

Welcome to “The Late Show.” I’m your host, Stephen Colbert.

Still? I am still the host?

Now, if you saw my monologue Monday, you know that I was a little upset at Donald Trump for insulting a friend of mine. So at the end of that monologue I had a few choice insults for the president in return. I don’t regret that. He, I believe, can take care of himself. I have jokes; he has the launch codes. So, it’s a fair fight.

So while I would do it again, I would change a few words that were cruder than they needed to be. I’m not going to repeat the phrase, but I just want to say for the record, life is short, and anyone who expresses their love for another person, in their own way, is to me, an American hero. I think we can all agree on that. I hope even the president and I can agree on that. Nothing else. But, that.

On an episode of "Late Night With Stephen Colbert," the host revealed that he had been prohibited from using his conservative, clueless TV show persona from "The Colbert Report" elsewhere. Instead, Colbert skirted around the issue by going into character under the guise of being Colbert's cousin. He also riffed off of his popular sketch "The Word" by recreating it with the name "The Werd."
View In Gallery
x
Looks like you're enjoying reading