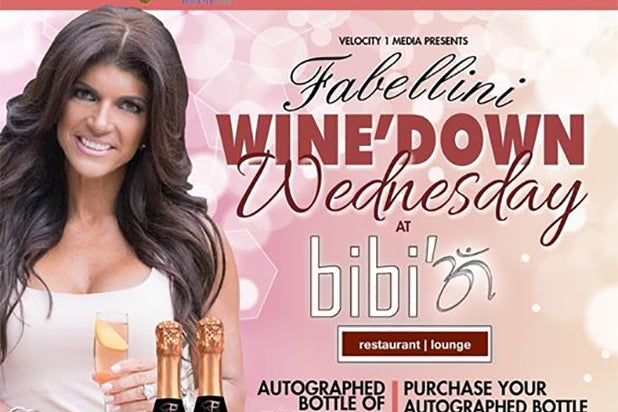 “Real Housewives of New Jersey” star Teresa Giudice was supposed to be promoting her own line of adult beverages at a New Jersey bar next week, but after a judge sentenced her 15 months in prison Thursday, she decided to cancel.

“Hi, I just want to be clear there will be no Fabellini appearance this week. Stay Tune [sic] for further appearance announcements,” she tweeted Saturday.

The cancellation comes in the wake of a federal court sentencing that will put both Teresa and her husband Joe Giudice in prison for counts of mail, wire and bankruptcy fraud. As TheWrap previously reported, Teresa was sentenced to 15 months in prison while Joe, who also pleaded guilty to failure to file a tax return, received 41 months. Because of their daughters, the couple will be allowed to serve out their sentences separately.

Previously outlets had reported Giudice would go through with her Fabellini party, aimed at promoting her own line of alcohol products. They cited an event flier which promised the reality star would autograph bottles and pose for pictures with attendees.

Giudice may not be attending that event, but the 42-year-old TV personality still has plans to appear on Bravo multiple times in coming days.

On Sunday she joins the rest of her “Real Housewives of New Jersey” cast for the Season 6 reunion episode, while on Monday she and her husband are scheduled to appear on a special episode of the Andy Cohen show, “Watch What Happens Live.” It will be their first interview since the sentencing.

Hi, I just want to be clear there will be no Fabellini appearance this week. Stay Tune for further appearance announcements.