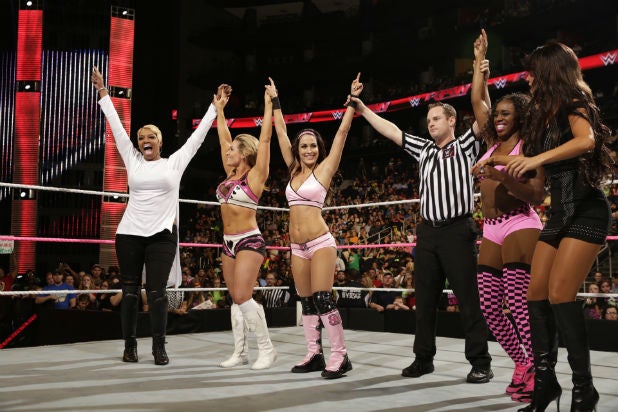 NeNe Leakes is no stranger to cat fights on Bravo’s “Real Housewives of Atlanta,” and now she jumped into brawls of a whole new variety.

The reality star guested on WWE’s “Monday Night Raw” where the show broadcasted from Atlanta and the claws were out backstage when Leakes got into with one of the “Total Divas” backstage.

Leakes faced off with Cameron in a heated confrontation outside her dressing room.

“Excuse you! There is a problem,” she said as you got up in the wrestler’s face in front of fellow WWE wrestlers the Bella Twins, Nattie Neidhart, Rose Mendes and Trinity.

Leakes is the latest guest star on the over-the-top show, following in the recent footsteps of Betty White, Jerry Springer, Kathie Lee Gifford and Hoda Kotb.

Leakes will soon be seen on Broadway, when she makes her debut in the role of wicked stepmother, Madame in “Rodgers & Hammerstein’s Cinderella,” taking over from Sherri Shepherd for a limited run beginning on Nov. 25. The production will play its final performance on Jan. 3, 2015, following a two-year run. Leakes is also set to reprise her role on Fox’s final season of “Glee.”

Watch the video of Leakes and Cameron’s heated meeting below.