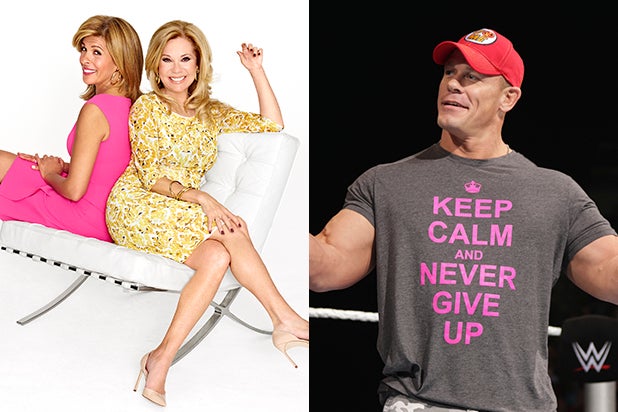 Kathie Lee Gifford and Hoda Kotb will take a break from getting tipsy during “Today’s” fourth hour to jump into the ring for WWE’s “Monday Night Raw” on Oct. 6.

The NBC hosts, best known for dishing on celebrity gossip while drinking on-air, are the latest guest stars to tackle the wrestling network’s showcase event.

“We’ve been wrestling every day at 10 a.m. in our own ring for the past seven years, and it gets down and dirty. So bring it on!” Kotb and Gifford said, while flexing their hosting muscles in preparation for the smackdown.

Before Gifford and Kotb make their primetime performance, WWE superstar John Cena will be a guest on their show to give them a personal pep talk and offer his wrestling tips.

The chatty hosts are tag-teaming with WWE as part of their support for National Breast Cancer Awareness Month and the Susan G. Komen Foundation. Kotb is a seven-year breast cancer survivor.

Veteran journalist and “Today” special #PinkPower correspondent Joan Lunden will be a ringside guest Monday, along with fellow survivors, after recently opening up about her own battle with cancer.

“WWE is thrilled to have Kathie Lee Gifford, Hoda Kotb and Joan Lunden join ‘Monday Night Raw’ to help shine a light on the battle against breast cancer,” said Stephanie McMahon, WWE’s Chief Brand Officer. “These women continue to be a voice for the millions that are affected by this devastating disease. We are honored to have their support in raising awareness and funds to continue the fight.”

WWE is putting its full weight behind the cause, with the WWE Superstars and Divas all wearing co-branded Komen and WWE apparel, and WWE platforms “going pink” for October.

The “Courage Conquer Cure” campaign will continue throughout the month, and WWE will donate 20 percent of the retail sales price of co-branded merchandise sold on WWEShop.com and at WWE live events to Komen.