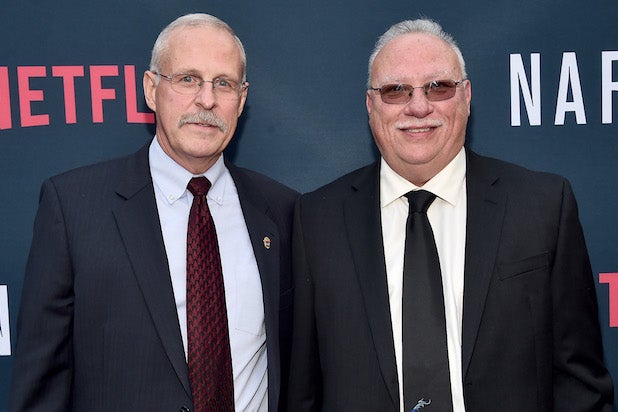 The real-life DEA agents who took down Colombian drug lord Pablo Escobar are shopping around a new docu-series about the opioid epidemic, TheWrap has learned.

Steve Murphy and Javier Peña, whose hunt for the Medellin Cartel leader was the focus of the first two seasons of Netflix drama “Narcos,” have teamed up with producers Marty Berman and Michael Horowicz to create a new show that looks at how the DEA is fighting the opioid crisis, as well as was what has happened to international drug cartels since Escobar’s death.

“What we want to do is show people what’s being done and what could be done,” Murphy told TheWrap. “[The opioid epidemic] is now the leading cause of overdose deaths in the county.”

Fentanyl seizures are trending up, according to U.S. Customs and Border Protection. During 2016, the first year CBP started tracking fentanyl seizures, officers seized 440 pounds nationally. That number more than doubled to 951 pounds in 2017, and 984 pounds through the end of April 2018.

Last month, CBP officers seized 110 pounds of the fentanyl with an estimated $1.7 million street value in Philadelphia, after a routine examinations of a shipment of iron oxide that arrived from China.

The seizures have become so frequent, Senate Minority Leader Chuck Schumer has called on China to prohibit the export of fentanyl, saying that the country produces more than 90 percent of the world’s supply of the drug.

Murphy and Peña plan to travel to China, where opioids are sold over the web and then delivered via the U.S. Postal Service. The show will also explore how D.E.A. agents around Europe try to curb the opioid trade, as they escort Murphy and Peña on busts.

The opioid docu-series promises unprecedented access to the inner working of the DEA, which according to Murphy is already “on board.” Cameras will follow the agents as they plan, rehearse and carry out their mission, including controlled busts, where small level dealers are allowed to continue to their delivery points so that agents can be led to bigger dealers; arrests of doctors who overprescribe opioids; and investigating fake pharmacists who possess real pill presses, and manufacture pills that look like real medications but are laced with fentanyl.

“The DEA sees the seriousness of this epidemic,” Murphy said. “One of the things they agreed to do is take us to their Chinese counterparts and show us where fentanyl comes from, how it’s produced and how the pill press works.”

Murphy (who was portrayed by Boyd Holbrook in “Narcos”) is the ex-DEA agent who, along with Peña, (played by Pedro Pascal) was the lead investigator in manhunt for Escobar, then a notorious leader of the Medellin Cartel. At its height in the late ’80s, his cartel was responsible for 80 percent of the global cocaine market, making him one of the richest men in the world with a weekly paycheck of $420 million a week, according to The Daily Beast.

Escobar was shot dead by Columbian police as he had tried to escape across the rooftops in Medellin on Dec. 2, 1993.

“We think the time is right to get in front of the camera and show the world how critical the opioid problem is around the world,” Murphy said. “Plus, we’d like to talk to the real DEA heroes and tell their success stories.”

Murphy, Peña, Horowicz and Berman are represented by UTA.