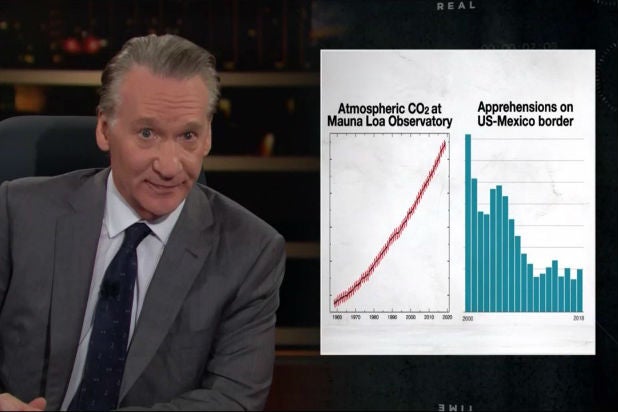 On Friday’s episode of “Real Time,” Bill Maher tore into Republicans who he says ignore climate change, and warned of all the things global warming might render extinct — including Supreme Court Justice Brett Kavanaugh’s beer.

In the “New Rules” segment of the show, Maher started by saying America does need a wall: “A sea wall, because the ice is melting, and rising oceans are going to swallow Miami.”

Maher asked, “What is it with Republicans and the environment? They never waver in their commitment to doing nothing,” and compared projections for immigration from Mexico to those for rising carbon levels. “Carbon is killing us, Mexicans are not,” he said.

“Climate headlines of the last few years have a definite theme, which is: you know that pants-s—ting fact we told you about a few years ago? Well s— more,” Maher continued. But, he said, the “tiny, tiny glimmer of hope” is that a majority of Americans now accept that climate change is a real threat — and those numbers could go up as people realize it could destroy things they like, like booze.

“The traditional wine regions of France, Italy and Napa Valley could all be too hot to grow grapes by 2050. And then where will alcoholics go on vacation? With no more wine, men trying to impress their dinner dates will have to burn money at the table. Priests will have to get children in the mood with music.”

Maher than got to Kavanaugh. Hotter climates, he said, “also make it harder to grow hops, which make beer. What is Brett Kavanaugh gonna drink with Squee?”

Also Read: Bill Maher and Ann Coulter Shout About Trump's Wall - and Over One Another - on 'Real Time'

Finally, after mentioning several food items that could be affected, like coffee, maple syrup and bananas, Maher ended the bit on a bleak joke:

“We’re a breakfast item away from losing the grand slam.”