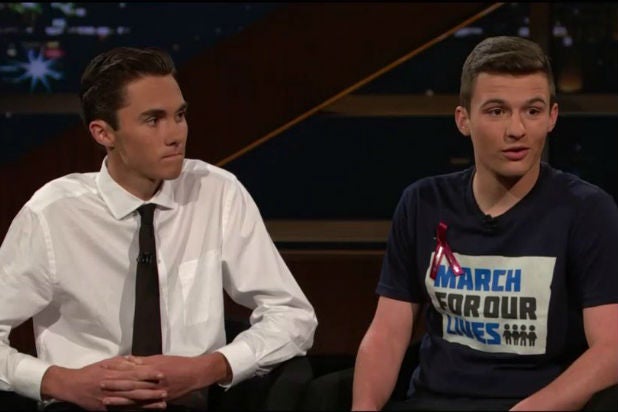 Marjory Stoneman Douglas High School student Cameron Kasky had a message for adults on Friday’s episode of “Real Time With Bill Maher”: “I mean this sincerely, to all the generations before us, we sincerely accept your apology. We appreciate you’re willing to let us rebuild the world that you f—-d up. “

Kasky and fellow students David Hogg, survivors of the massacre that killed 17 people in Parkland Florida, appeared at the top of the show to talk about gun control, and to push back against calls for student activists to stand down.

“I think one of the best things about our generation,” Kasky said, “[is that] we don’t respect people just because we have to. Mr Rubio if you don’t believe me watch the news,” a reference to the public relations beating the Florida senator took after Feb 21 gun violence town hall on CNN.

“We don’t let people steamroll over us. We have voices and we use them, sometimes unfortunately, sometimes for good,” Kasky continued.

“We’re millennials and we love complaining more than any other generation,” Hogg added.

The pair also talked about their contentious relationship with opponents of gun control. In fact, Kapsky told Maher “I hung up on the white house.”

Trump’s White House invited him to attend his infamous “listening session,” Hogg said, but he was offended by the timing: the day before. Hogg says he told them “We expected president Trump to come to the CNN town hall,” adding that “the fact they called us the day before I found very offensive considering the fact that there were funerals the next day.”

Hogg and Kapsky are cofounders, along with fellow Stoneman Douglas student Emma González, are the cofounders of the student-led gun control group Never Again MSD. They’re also organizers the upcoming “March For Our Lives” gun control rally, happening in multiple cities on March 24.