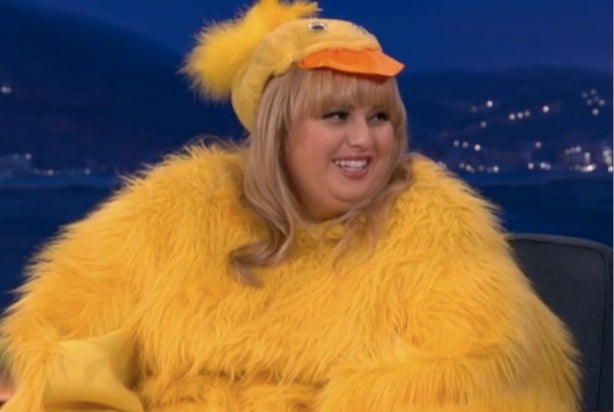 Rebel Wilson stuck it to One Direction for not knowing who she was when she hosted the Teen Choice Awards last summer, but her foul-mouthed revenge didn’t make her too popular with the tween girls in the audience.

Wilson told Conan O’Brien that she was a big fan of the U.K. super group and was thrilled to get the chance to visit their dressing room at the show.

“I know all of their songs…I bought all their albums. Have they had more than one?” Wilson said on Tuesday night’s “Conan.”

Apparently the fandom didn’t extend both ways, because when she asked to take her picture with the hunky five-some she was greeted with a discernible lack of enthusiasm.

“I don’t think they’d seen the hit movies ‘Pitch Perfect’ or ‘Bridesmaids’ ’cause they were like whose this like desperate loser coming in?” Wilson.

So when she took the stage during the awards show, Wilson quipped, “Wow, isn’t it funny there’s a band called One Direction, ’cause that’s also the name I give my asshole.”

The joke bombed, as thousands of 11 and 12 year old girls were horrified to have their teen idols compared to anatomical plumbing. It also got censored.

Sadly, the Teen Choice Awards would not be the last time Wilson ran afoul of broadcast standards. The star of the new ABC sitcom “Super Fun Night” also reported that those pesky censors won’t let her make jokes about dolphin rape of Asian tourists and they won’t allow her show to air a visual gag that would have seen her try on a bathing suit while inadvertently exposing her pubic hair.