"The phony must die, says the Catcher in the Rye.
Don’t believe in John Lennon.
Imagine John Lennon is dead, oh yeah, yeah, yeah!”
–Mark David Chapman’s chant, overheard by his wife, days before the murder.

In his Sheraton Hotel suite, he stands at the bureau, carefully arranging an altar. To the left he places a snapshot of himself, smiling broadly, arms around Vietnamese refugee children at Fort Chaffee, Arkansas. Next to it, he lays down his YMCA supervisor’s hand-printed letter of praise for exemplary service. Behind these, he tapes to the mirror the "Wizard of Oz" poster he picked up downtown yesterday, the one of Dorothy wiping away the Cowardly Lion’s tears before she taps her ruby slippers and flies back to Kansas from Emerald City.

Now the former Christian camp counselor picks up the Gideon Bible, opens it to the Gospel of John title page and, in bold letters, carefully prints LENNON after it.

He steps back and beholds his display proudly, imagining all the reporters crowding the room, snapping pictures. Finally he reaches into his suitcase, withdraws the .38 Charter Arms revolver and slips it into the inside pocket of his overcoat.

Dec. 8, 1980, is an unusually warm, spring-like day in New York as the bespectacled Mark David Chapman sets out from the Sheraton on foot.

Across town, John Lennon is enjoying his after-breakfast Gitane and cappuccino at La Fortuna, his favorite neighborhood cafe. His wife, Yoko Ono, is reviewing with him her arrangements for yet another busy day of interviews and photo sessions for their album "Double Fantasy." She tells him they need to step up the publicity blitz and give Rolling Stone a good cover later this morning. 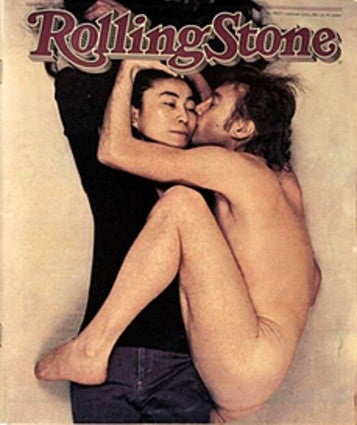 John groans. This is not his favorite part of the business. The fans in front of the Dakota Hotel are growing. Only yesterday, Sunday, he’d chased after some bespectacled nerd who wouldn’t stop shooting pictures of him. Yoko managed to call him off. “If anyone gets me, it’s going to be a fan!” he told her, letting the kid go.

As Chapman makes his way beneath the canopy of the sunlit skyscrapers, he hears the weeping of his own dear wife, Gloria. He’d left her in tears at the Honolulu airport gate. He’d had an appointment with a psychiatrist only days before, but failed to show up. He assured Gloria that he was flying to New York to find a job and make a new life for them both. But he keeps hearing her crying, which again gives way to the voices of his Little People, who have been with him since childhood. "Please, think of your wife,” they plead. “Please, Mr. President. Think of your mother. Think of yourself!"

It’s 11:30 a.m. now and John Lennon is lying naked on the floor of the White Room, curled in a fetal position around a fully clothed Yoko Ono. At the periphery of the umbrellaed spots, Rolling Stone’s Annie Leibovitz circles the couple with her camera exclaiming “Yes!" "Hold that!" "Great!”

Six stories below, Mark Chapman, standing at the front of a small crowd of fans now, is peering up at the Gothic, high-gabled edifice of the Dakota. Under his arm he holds "The Catcher in the Rye" and a fresh copy of "Double Fantasy."

After Leibovitz takes her leave with the historic celluloid, her subjects retire to Yoko’s office for a phone interview with Dave Sholin, San Francisco radio personality. "We’re either going to live or we’re going to die,” John tells him. “I consider that my work won’t be finished until I’m dead and buried — and I hope that’s a long time." Only weeks before, during his talk with Playboy, he had been interrupted by a car exhaust backfiring outside the Dakota. “Another murder at Rue Dakota!” he had cracked.

Mark Chapman keeps waiting. He has seen Lauren Bacall, Mia Farrow and Paul Simon himself duck out from the building, but still not the prize. He bides his time chatting with a regular visitor, Jude Stein, as well as a young local photographer, Paul Goresh, who has succeeded in snapping the Lennons here several times.

Suddenly Jude alerts him to an elderly woman emerging from the lobby, hand in hand with a young boy. Jude presses forward, introducing her new friend to 5-year-old Sean Lennon.

“He was the cutest little boy I ever saw,”  former YMCA counselor Chapman would recall. “It didn’t enter my mind that I was going to kill this poor young boy’s father and he wouldn’t have a father for the rest of his life. I mean, I love children. I’m the Catcher in the Rye.”

Soon after the boy is gone, a limo pulls up. The black iron gates are thrown open and John and Yoko Lennon materialize surrounded by their staff. Goresh shoves Chapman forward. Suddenly, he finds himself standing in front of John Lennon himself, holding out his album and a pen. The star hastily autographs the album.

"Is that all you want?" he asks the fan.

“Yeah… Thanks, John!” the young man stammers at last.

"I was just overwhelmed by his sincerity,” he later recalled. “I had expected a brush-off, but it was just the opposite. I was on Cloud Nine. And there was a little bit of me going, ‘Why didn’t you shoot him?’ And I said, `I can’t shoot him like this.’ I wanted to get the autograph."

Their limo drops the Lennons off across town at the Record Plant. They spend the next six hours here, mixing Yoko’s first solo single, "Walking on Thin Ice." "I may cry someday but the tears will dry whichever way," sings Mrs. Lennon, "and when our hearts return to ashes, I’ll be just a story."

They work till 10:30 that evening, John insisting on getting the recording just right. Yoko suggests they go out for a late dinner at the nearby Stage Deli, but John wants to return home to tuck Sean in. "See you tomorrow morning, bright and early!" he calls to his sound engineer, Jack Douglas, as he leaves.

Mark Chapman is alone now at the Dakota, a solitary sentry. As the cabs speed past on 71st Street, he chats with the Cuban doorman, Jose Perdomo, about the Bay of Pigs and the JFK assassination.

Suddenly, he turns toward the curb, eyes widening. The long black car with the opaque windows glides to a stop only feet away. John jumps out, carrying a tape recorder. Yoko follows. As Lennon brushes past Chapman, he gives him a sudden hard glance.

“He printed me,” the gunman would later confess. At that instant, “I was praying to God to keep me from killing Lennon,” he went on, “and I was also praying to the devil to give me the opportunity, because I knew I would not have the strength on my own.”

He drops down in a combat squat. “Mr. Lennon!” he shouts.

John doesn’t have time to turn to the voice before four hollow-point bullets tear through his back. “I’m shot!” he chokes, staggering six steps and collapsing inside the concierge’s booth, blood spraying from his lips.

Chapman drops the gun to the pavement. “Do you know what you’ve done!” cries Jose, rushing him, kicking the weapon across the pavement. Heart racing, hearing a woman’s sobs inside the hotel foyer, Chapman begins pacing.

“I was ‘Mr. Nobody’ until I killed the biggest Somebody on earth,” he later told his biographer, after being exorcised of “six demons” at Attica State Prison.

Two squad cars scream up. As the first team of policemen rush the suspect, he drops "The Catcher In the Rye" and "Double Fantasy" and throws his arms up crying, “Don’t hurt me. I’m unarmed. I acted alone!”

The second team of officers, Bill Gamble and James Moran, dash into the cubicle where Yoko is huddled over her husband, sobbing.

John’s eyes are glazed as Gamble and Moran carry him to their squad car and lay him out on the back seat, knowing they can’t wait for an ambulance.

“I’m not afraid of dying,” John had once said. “It’s just like getting out of one car and into another.”

The Beatle spends his last moments on the back seat of a speeding NYPD squad car. The phantasmagoria of the city lights flashes through the windows on his fixed pupils as the blood pours from his chest and the officers call to him as if from a dream, “Are you John Lennon? Do you know who you are? Are you John Lennon?”

But their voices are drowned in the wail of the sirens. Then he hears another voice, his own, echoing within him and without him, louder and louder, delivering him to infinity….