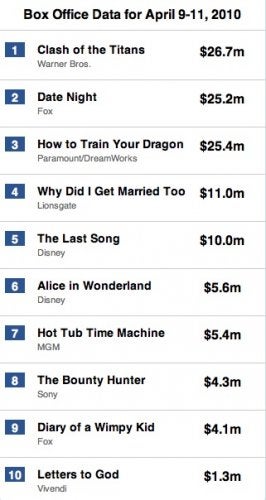 Based on a narrow three-day estimate of $27.1 million vs. $26.9 million, the weekend box office crown was awarded Sunday to Fox romantic comedy "Date Night."

But once the final Monday "actuals" were in, it was clear that "Titans" had won the weekend by a fairly large margin, taking in $26.7 million vs. $25.2 million for "Date Night."

In releasing its weekend estimate Sunday morning, Fox had estimated a $7.1 million Sunday haul for "Date Night," but the film obviously came in well below that figure.

The pairing of TV comedy stars Tina Fey and Steve Carell in a Shawn Levy-directed rom-com produced enough chemistry to exceed pre-release projections and finish No. 1 at the domestic box office with $27.1 million this weekend, according to studio estimates.

The three-day tally for Fox’s "Date Night" narrowly edged out the week-two total for Warner’s "Clash of the Titans," with the 3D-converted epic bringing in $26.9 million over the three-day period. "Titans" dropped 55 percent from its premiere week — actually not as bad a decline as many had expected — and has now grossed $110.5 million in the U.S. and Canada.

DreamWorks Animation’s 3D film "How to Train Your Dragon" finished in third place in its third week of release, grossing $25.4 million with an extraordinarly small 11 percent week-to-week decline.

Lionsgate’s Tyler Perry-produced "Why Did I Get Married Too" dropped 62 percent in its second week, but finished fourth with $11 million. Shot for $20 million, its two-week gross stands at $48.5 million.

But the story of the week was "Date Night," a $55 million film that  continued "Night at the Museum" director Levy’s streak of commercially successful comedy enterprises.

"It was fantastic the way we over-performed our tracking," said Fox executive VP of distribution Chris Aronson, who had predicted an opening in the low $20 million range.

Also of note were the legs of "Dragon."

When the $165 million film got off to a disappointing $43.7 million opening two weeks ago, one Wall Street analyst — explaining why DreamWorks’ stock was cratering 8 percent — predicted a total domestic gross of only $160 million for the movie.

However, "Dragon" is now up to $133.9 million in the U.S. and Canada, and doesn’t appear to be going anywhere fast.

Also hanging in — despite a lack of available 3D screens — Disney’s "Alice in Wonderland" grossed $5.6 million this weekend, bringing its six-week total to $319.3 million. It’s now Disney’s fourth highest grossing movie ever in the U.S. and Canada.

While "Date Night" was the weekend’s only widely released film, Vivendi Entertainment did release low-budget Christian film "Letters to God" in 897 theaters, grossing $1.3 million and finishing in 10th place.