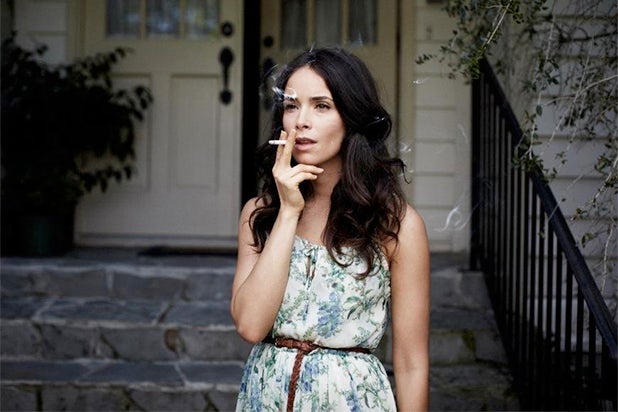 SundanceTV’s “Rectify” is about a man who must learn to live as a free man after a technicality sets him free from death row, where he had been in solitary confinement for 19 years. It’s a heavy subject to tackle, and no easy task for the actors who play those in Daniel Holden’s circle.

Abigail Spencer had to mostly play it straight as Daniel’s (Aden Young) protective sister Amantha, who put her life on hold in order to work endlessly to free her brother. Not surprisingly, Spencer has particular fondness for one episode in the show’s second season in which Amantha got to let her hair down a bit.

“In episode 7, when Amantha gets stoned, that whole episode was so fun to do,” she told TheWrap. “It was so fun to see Amantha silly and trying to get candy out of a machine… It was painful, too, because the decision came out of treating someone not the way she wanted to treat them, at the beginning of the episode, but to be stoned for the rest of it was amazing.”

“Rectify” is a showcase for quiet, understated acting, and Spencer believes creator, writer and executive producer Ray McKinnon deserves the lion’s share of the credit. She also discussed the toughest episode she had to shoot, why you only need a brain and a heart to appreciate the show, and why she’s a binge-watcher.

TheWrap: What was the toughest thing you had to do last season?
Abigail Spencer: There’s a scene in Episode 4 and it’s basically when Amantha — the whole episode feels like one scene — has a whole day where she binge-eats and smokes, like, 23 cigarettes and finds herself in Thrifty Town and asking for a job. There was something about that scene and that episode, I feel all of Amantha, I feel all of it. Her pride, her guilt, her weakness, her strength, I feel all of it.

What was the most fun thing you got to do?
Oh my gosh. In episode 7, when Amantha gets stoned, that whole episode was so fun to do. It was so fun to see Amantha, like, silly and trying to get candy out of a machine, and that scene with Teddy, Jr. when she’s playful with him. You remember that they’re brother and sister. That whole episode where Amantha gets stoned. It was painful too because the decision came out of treating someone not the way she wanted to treat them, at the beginning of the episode. But to be stoned for the rest of it was amazing.

Let’s assume that somebody has never seen your show. What would you say to persuade them to watch it?
I would use a very current phrase, if someone said they hadn’t seen it, I would be like, “I can’t even.” I’d probably start there, really ramp it up to make them feel so left out. And then I’d tell them, if they have family, if they have a brain, if they have a heart, they should watch “Rectify.”

Who else on your show really deserves an Emmy, and why?
Everybody. I think the show, in general, because it’s such a collaboration and Ray McKinnon deserves an Emmy. He writes, he directs, he edits, he does everything so I would love to see him win an Emmy. I know that’s not an actor-focused answer, but he is an actor and I feel like he’s the third scene partner in every scene. If I’m doing a scene with Janet or Daniel or John, Ray is our other scene partner. His energy is so palpable and he’s really there pulling for our performances. Ted Jr. — I think Clayne Crawford is amazing, what he’s done with that role, it’s totally blown me away. I would say Ray McKinnon because then that means everybody wins an Emmy.

Are you a binge-watcher, or a once-a-weeker?
I’m inconsistent. When I get into a story, I want to see it through. I watched “The Knick” so fast, I devoured “The Knick.” I devoured “Togetherness,” I just couldn’t wait to see what happens next. I kinda do that with “Girls” too, like I’ll wait and then I’ll just watch them back to back. I did the same thing with “Transparent.” The only thing I’m behind on is “Mad Men.” I’m waiting to watch it all together. So I guess I’m a binge-watcher, is what I’m discovering here [laughs]. It’s usually a late-night thing. I’ll be up, I’ll be watching at 10, and then all of a sudden it’s 2 a.m.

If you could add any new category to the Emmys, serious or silly, what would it be?
I would add Best Supporting Supporting Actor and Actress. There are just too many actors, you can’t get them all in. Everything’s just Best Actor, Best Supporting, but there’s — everybody’s supporting.

Is Daniel guilty? Do you know or have an opinion?
I definitely have an opinion. Do I know, like from a Ray McKinnon standpoint? I’m not even sure if he knows. I think he’s still discovering. Or maybe he does. He really deserves an Emmy if he does know because, man, he has kept that under wraps…  That’s the thing, it truly doesn’t matter. The show is not about if he did it or not. The show is about memory. The show is about someone’s life after their life is taken away and then suddenly brought back to life. It’s a rebirth story. It’s about how one single act — the ripple effects of this one single act towards everyone in the family and the town and beyond. Hopefully, it really feels like the show becomes about what we do matters. Daniel’s life matters, his decisions, actions and his life matters. Even though the show can be associated with expressions of dark and dramatic and whatnot, but people keep coming back because the show makes them feel alive, it makes them feel something. It’s much more about a man discovering his life and everyone around him getting the same opportunity.