Denzel Washington, Scarlett Johansson, Catherine Zeta-Jones and Viola Davis were among the Tony winners on a night when Broadway’s biggest awards went to the drama “Red” and the musical "Memphis."

“Red,” playwright John Logan’s look at the artist Mark Rothko, was the big winner of the night with six Tonys. Logan is currently working with director Kathryn Bigelow on a pilot for HBO.

"Memphis," set in the city’s musical scene around the time of the birth of rock ‘n’ roll, was named Best Musical in a tight race that also included the Green Day musical “American Idiot,” the African-set “Fela!” and another musical about early rock, “Million Dollar Quartet.”  "Memphis" was also honored for its book, by Joe DiPietro, and it’s score by David Bryan and Joe DiPietro.

As expected, “La Cage Aux Folles” was named Best Revival of a Musical.

Washington and Davis won the awards for Best Performance by a Leading Actor and Actress in a Play for their work in the revival of August Wilson’s “Fences,” which was also named Best Revival of a Play. 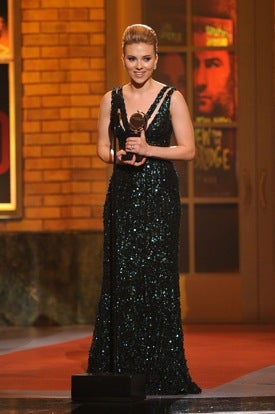 The Tonys for Best Performance by a Leading Actor and Actress in a Musical went to Douglas Hodge in "La Cage Aux Folles" and Catherine Zeta-Jones in "A Little Night Music."

Best Performance by a Featured Actor and Actress in a Musical went to Levi Kreis in “Million Dollar Quartet” and Katie Finneran in “Promises, Promises.”

Sean Hayes, the star of the latter show, hosted the Tonys, which took place at Radio City Music Hall and also included performances by Green Day, Catherine Zeta-Jones and many other stars of the nominated productions.

His monologue referred to the Tonys as "the World Cup of show tunes," and used a steamy kiss with costar Kristin Chenoweth to poke fun at a recent Newsweek article that said that as a gay man he wouldn’t be accepted in straight roles.