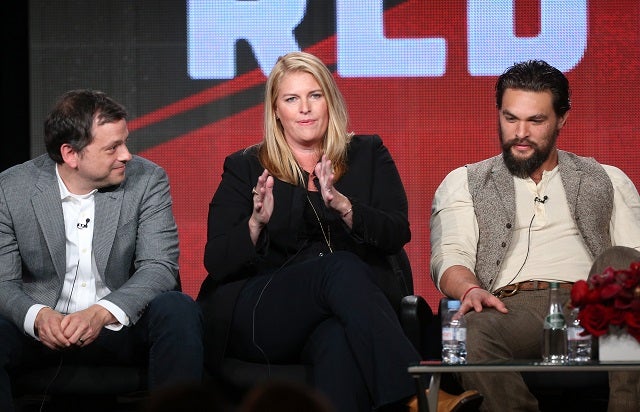 Sundance Channel’s upcoming scripted drama “The Red Road,” which centers on a sheriff who strikes an uneasy alliance with a Native American after tragedy strikes, is based on an actual Indian tribe residing near New York City.

During a panel for the series at the Television Critics Association press tour in Pasadena on Saturday, show creator Aaron Guzikowski and executive producer Bridget Carpenter (pictured above, with series star Jason Momoa) discussed the challenges of creating a fictionalized form of a real tribe while staying true to the source material.

“It’s a really interesting world that I don’t think many people have seen before. This particular Indian tribe lives really close to New York City — so close to the modern world, and yet they’re still living off the land and living the way they want to live,” Guzikowski noted during the panel. “It’s a very small tribe and they have not been granted federal recognition. There are a lot of things that make them unique.”

“This is a script that was initially inspired by a real world. That said, Aaron spins a yarn; Aaron knows how to make up a story, as I’m sure you guys know from watching ‘Prisoners,'” Carpenter added, referring to Guzikowski’s 2013 crime drama. “It’s a totally, totally invented story.”

So how does one go about remaining true to reality while also spinning a yarn? Guzikowski and Carpenter explained that, in addition to visits to meet with the tribe, the show employed a consultant in the interest of keeping things real.

“The details of the world were totally important to us,” Carpenter said. “[The consultant] would read scripts, she would flag things and bring our attention to things that did not ring through, that were not authentic.”

Asked if the writers’ team also strove for authenticity by hiring Native American writers, Guzikowski admitted that they had failed on that count — but there’s a reasonable explanation for that.

“We have a writing staff, they’re actually right here,” Guzikowski noted, gesturing toward himself and Carpenter.