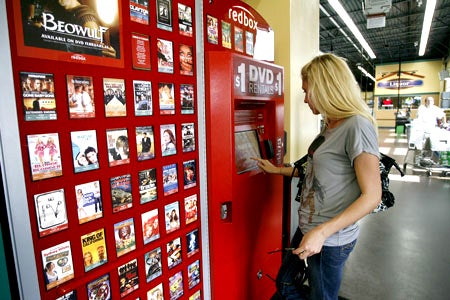 On the back of soaring DVD rentals, Redbox owner Coinstar reported net income of  $6.4 million, or 21 cents a share, during the first quarter, quadrupling its profit from the same period last year.

Revenues were up more than 47 percent (to $350.1 million) as Redbox DVD sales – which account for more than 75 percent of Coinstar’s revenues — increased more than 70 percent.

The company operates more than 20,000 $1-a-day kiosks in the U.S. In recent months, Redbox has inked deals with Warner Bros., Universal Studios and 20th Century Fox to carry their new movies about a month after their release.

The 28-day window is aimed to help rental stores like Blockbuster survive, and to not cannibalize studio retail sales.

Shares of Coinstar jumped more than 23 percent (to more than $50 per share) Friday on the news.