Redman and Method Man will reunite, as the former will guest star in a second season episode of Starz’s “Power Book II: Ghost.” Method Man is a series regular on the drama, co-starring with Mary J. Blige.

Here is Starz’s description for the character: Theo Rollins used to run the streets with his little brother, Davis MacLean. But now, they sit on opposite sides of the law with Theo serving an extensive prison term, and Davis, off his win in the Tasha St. Patrick case, now the biggest defense attorney in New York City. They both know, had the past played out differently, Davis could be locked up alongside his big brother, but Theo questions if the guilt’s enough for Davis to keep his promise. 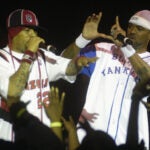 Also Read:
Method Man Tells Us Why 1999 Hit ‘Da Rockwilder’ Is So Short: Redman ‘Didn’t Like the Track’

Redman and Method Man were an iconic hip-hop duo during the ’90s, releasing their first album together in 1999, “Blackout!”

The first season of “Power Book II: Ghost” premiered on Sept. 6, featuring characters from the original “Power” series from executive producers Courtney A. Kemp and Curtis “50 Cent” Jackson. Kemp is also creator and showrunner of the spinoff. It was the first of four spinoffs for the franchise.

“Power Book II: Ghost” picks up “shortly after the earth-shattering events of ‘Power,’ as Tariq St. Patrick (Michael Rainey Jr.) grapples with a new world order: his father James “Ghost” St. Patrick is dead, and his mother, Tasha (Naturi Naughton), is facing charges for his murder — even though Tariq pulled the trigger.”