Speaking at the Milken Institute Global Conference on Wednesday, a feisty Viacom chief Sumner Redstone predicted he would never die. He also predicted that newspapers would. 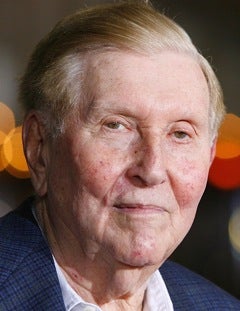 That, and, oh yes, that Paramount would have the biggest year in its history.

In a closed-door, wide-ranging session led by CNN’s Larry King, the nearly-86-year-old media magnate took several swipes at News Corp chairman Rupert Murdoch, saying he paid $5 billion for the Wall Street Journal at a time when there were no takers.

But the theme of the session was about immortality, and Redstone affirmed that he was indeed immortal. “I have no intention of ever retiring, or of dying,” he said. “ Hawaii is nice; I can take a two-day vacation.”

Redstone said he also would never relinquish control of his company, which is the major stakeholder in both CBS and Paramount.

He said that Michael Eisner, who led the Walt Disney Company for more than a decade, was forced out because he did not have control of the company, a mistake he said that Ted Turner also made in selling his company to Time Warner. “That’s one thing I’ll never do … give up control of CBS or Viacom,” he said.

Asked about Paramount, he predicted the studio — which kicks off its summer schedule with a revival of the “Star Trek” franchise next weekend — would have “its best year in history. We will take more market share.” This, despite the loss last year of DreamWorks, which ended its relationship at Paramount.

CBS president Les Moonves sat in the back of the room.

Asked about the changing media landscape, he said, “It's exciting. It’s revolutionary. It turns me on.”

But, he added, “I do not think newspapers will survive. People will go to the Internet … I’m not sure there will be newspapers in 10 years.”

As for whether he uses email or the Internet, he said, “I have people to do that stuff. I’m still working on the screwdriver.”

There was a lot of familiar talk about the digital future, what it means, the struggle to find monetary return with content fleeing to the small screen, the mobile phone, and blah blah blah.

Chernin said he was optimistic about the future, and confirmed that he would be looking for opportunities in the digital area, in addition to making film and television shows, when he leaves News Corp in June.

"I'm looking to create a life that is personally appealing, and do things that are professionally satisfying," he said, referring to his work on Hulu (though he notably didn't mention MySpace, see our story on its struggles). "The broad areas of growth are likely to be international, digital and in cable."

He will be focusing, he said, on opportunities in the digital arena.

Bart did ask about the seismic change in the talent agency, with the new formation of WME Entertainment, questioning whether the new agency might "challenge the majors."

"No," replied Chernin flatly. "Talent wants to that their agents are focused on taking care of them and their careers."

The most newsworthy portion of the entire debate came at the very end, when Moonves and Chernin finally addressed the outcome of the protracted standoff with the Screen Actors Guild, which only ended in a deal this month.

Chernin accepted some responsibility for the lack of communication between the guild and the studios. "We got off on the wrong foot," he said. "We did not communicate well in those discussions. But we weren't going to saddle the industry with agreements that would lead to our own obsolescence."

Moonves complained that the mood from the guild was unnecessarily hostile, while the entertainment industry needed to pull together and find solutions to changing technology.

"The idea that management doesn't care isn't true," he said. "In an economic downturn, we are in it together. We're all in this community, with technology changing, the economy changing. The attitude was that we are the bad guys. The animosity, unfortunately, still exists, instead of us saying, 'Let's figure this out together.'"

Moonves seems to forget, however, that the Hollywood studios ignored the guild for weeks that stretched into months, using strategies to further divide the already-divided labor organization.