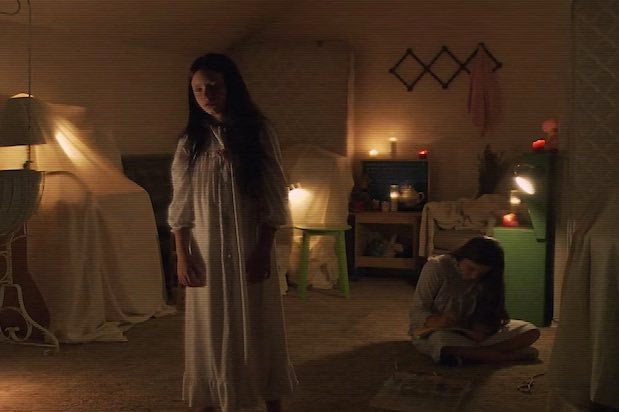 The head of the largest U.S. movie theater chain on Tuesday questioned the validity of Paramount Pictures’ experiment with an early video-on-demand release for “Paranormal Activity: The Ghost Dimension,” suggesting that last weekend’s box-office rollout and returns were slashed so much that comparisons with the norm became irrelevant.

“If the video-on-demand numbers are up, is that because people wanted to see it at home, or because they couldn’t find a theater to see it in?” Regal Entertainment Group CEO Amy Miles asked after the company posted upbeat third quarter earnings.

Regal, Cinemark, Carmike, Marcus and Harkins theater chains refused to play the horror film after distributor Paramount cut a deal with the AMC and Cineplex chains to shorten the exclusive theater run and make the film available via video on demand after roughly 17 days — rather than the standard three-month period. That resulted in “The Ghost Dimension” debuting in 1,656 theaters, about half the number it normally might have.

Despite being the first “Paranormal” film offered in 3D, Paramount’s sixth and final installment opened at $8.2 million, the worst ever in the series and roughly $10 million under the projections of analysts before the theater count was slashed. The film averaged just $4,755 per theater — roughly a third of the $13,838 that the first five films averaged.

The studio said it was willing to absorb the potential loss — the VOD numbers won’t be known for weeks — because it would provide Paramount, its rivals and the rest of the industry with accurate data to assess the impact of tweaking the distribution model in place for years.

The motivation to adjust the model for movie releases comes as consumers, especially young ones, increasingly migrate from theaters to online for film viewing.

Miles said she’d consider taking part in future tests, despite her comments on the experiment, which continues with Friday’s release of another low-budget horror film, “Scouts’ Guide to the Apocalypse.” She said the company’s position was comparable on Netflix, which recently released the Oscar hopeful “Beasts of No Nation” for streaming on the same day it was released in theaters. That rollout was boycotted by Regal and the majority of the largest theater chains.

“We would be open to any idea, any discussion, any test, any experiment that we think has the potential to grow that overall pie,” she said. “But that’s as long as any associated economic arrangement provides us a financial participation that is greater than or at least equal to the risk te are undertaking.