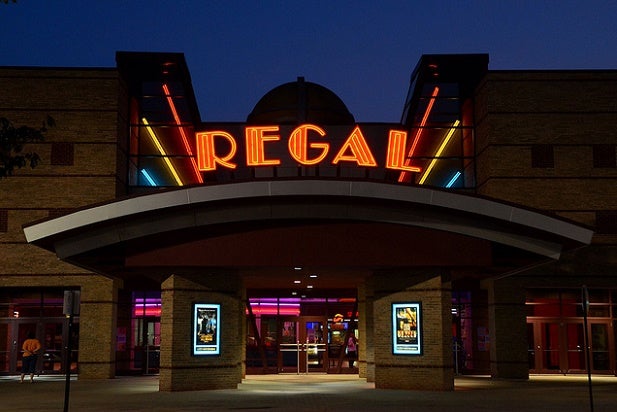 The Regal Entertainment Group, the nation’s largest movie theater chain, has begun checking moviegoers’ bags and purses before allowing them inside to watch the film.

“Security issues have become a daily part of our lives in America. Regal Entertainment Group wants our customers and staff to feel comfortable and safe when visiting or working in our theaters,” the chain said on its web site, as it began having its employees inspect bags this week.

“To ensure the safety of our guests and employees, backpacks and bags of any kind are subject to inspection prior to admission,” it continued. “We acknowledge that this procedure can cause some inconvenience and that it is not without flaws, but hope these are minor in comparison to increased safety.”

Regal began gradually instituting the policy this week in some of  the 569 theaters it operates, which have 7,318 screens. With Regal Cinemas, and the Edwards and United Artists chains under its aegis, REG has theaters in nearly every state.

Regal, based in Knoxville, Tenn., is the first national cinema chain to start checking backpacks and bags before moviegoers are allowed inside, though some independent chains have experimented with bag checks. Showcase Cinemas, a chain of theaters in the Northeast, said it now prohibits backpacks and packages.

Two recent incidents have brought movie safety issues to the fore. In July, a gunman killed himself after killing two at a movie theater in Lafayette, La.,  And earlier this month, in Nashville, Tenn., a man was shot and killed after he attacked moviegoers with pepper spray and a hatchet.

Last week, James Holmes, was sentenced to life in prison. for his 2012 shooting rampage in Aurora, Colo., in which 12 people were killed and another 70 injured.

A National Association of Theaters Owners spokesman contacted by TheWrap said Wednesday that the umbrella group representing the chains would have no statement on theater security issues. Exhibitors are reluctant to get into much detail on safety measures, concerned about tipping off those who are intent on beating them.

Calls to Regal were not immediately returned on Wednesday and spokesmen for AMC Entertainment and Cinemark Theaters, the nation’s second- and third-largest chains, declined comment as well.

It’s a complex issue for theaters owners and Hollywood. The exhibitors and studios have to balance keeping consumers content in an increasingly competitive entertainment market, with keeping them safe. And it’s not clear who’s responsible for, and best equipped to ensure, the safety of moviegoers.

“Violence is clearly a larger issue that affects more than movies,” said Exhibitior Relations senior analyst Jeff Bock. “You have to have the same concerns at grocery stores, sporting events. We need a more comprehensive policy, and I think the government is better equipped to come up with it than Hollywood studios and movie theaters owners.”

Also Read: A History of Violence at the Movie Theater: From 1979's 'The Warriors' Gang Showdown to 2015's Lafayette Tragedy

Cost is a factor, too. Security experts have said that the electronic equipment required to make movie theaters as safe as airports  could cost more than $1,000 per site, which would be prohibitive for many smaller, independent theaters and could force them out of business.

The majority of moviegoers at theaters with the increased security steps were OK with them, according to media reports from areas at which Regal had begun the checks, which are common at concerts and sports events held in large stadiums.

“It’s sad, but in the millions of theaters, with anywhere from 12-20 screens showing 6 or more films a day, the chances are so small. I don’t worry because if it’s my time it’s my time. Can’t let things like this stop you from enjoying your life,” Sidney Irizarry told the Fox TV affiliate in San Diego.

Steph Lao, a student at Northeastern University, said she generally feels safe at the movies.

“I don’t walk out of my house thinking that someone is going to shoot me,” she told the Boston Herald. “At the end of  the day it comes down to gun control.”

But not everyone was happy with the plan.

“It’s just another way for them to keep us from bringing our own food in,” said one irritated moviegoer outside a Regal theater in Boston.