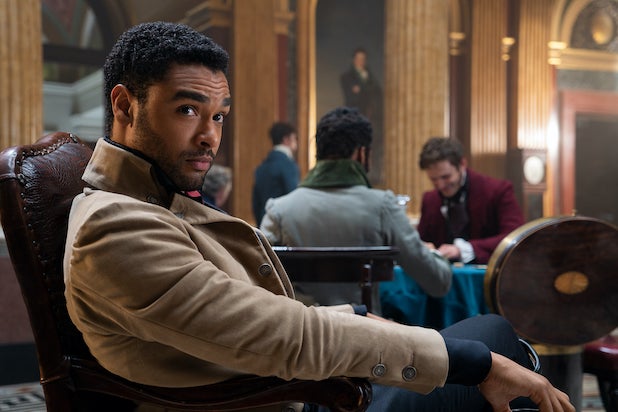 Many, many fans of Netflix’s “Bridgerton” were heartbroken over the Friday announcement that the show’s Season 1 heartthrob, Rege-Jean Page, who played Simon Basset aka the Duke of Hastings, will not appear at all in the Shonda Rhimes-produced drama’s upcoming second season. Though this probably came as less of a shock to fans of the Julia Quinn novels the show is based on, which move on from Simon and Daphne Bridgerton (Phoebe Dynevor)’s love story to that of her brother Anthony in the second installment, it is still a pretty big bombshell to drop that the Duke won’t make any appearance in the next batch of episodes. But there is a reason why — and a reason why he could still come back for potential future seasons.

For starters, Page came into the project under contract for one season only. And though he was offered the chance to make cameos in Season 2, an individual with knowledge tells TheWrap he turned down the opportunity to focus on other projects as his main storyline on “Bridgerton” had wrapped up.

“It’s a one-season arc. It’s going to have a beginning, middle, end – give us a year,” Page told Variety on Friday of his early conversations with Rhimes and other producers about joining the show in the role of Simon. “[I thought] ‘That’s interesting,’ because then it felt like a limited series. I get to come in, I get to contribute my bit and then the Bridgerton family rolls on.”

Season 1 of “Bridgerton” is adapted from “The Duke and I,” the first book in Quinn’s “Bridgerton” novel series. That book, and thus “Bridgerton’s” corresponding first season, centered on Daphne Bridgerton and her love interest, Simon. Their story is resolved by the end of Season 1, with them happily married and welcoming the arrival of their first child following Simon’s reconciliation with his issues about having children.

“One of the things that is different about this [romance] genre is that the audience knows the arc completes,” Page told Variety. “They come in knowing that, so you can tie people in emotional knots because they have that reassurance that we’re going to come out and we’re going to have the marriage and the baby.”

While Page’s Simon will not appear on screen at all in Season 2, which recently completed its first table read and will be going into production this month, Daphne is very much still part of the story and so she will be at her brother Anthony’s (Jonathan Bailey) side as he goes on his own romantic journey with new character Kate Sharma (played by “Sex Education” alum Simone Ashley). This means that Simon will be referenced throughout the season, as he’s still Daphne’s husband and the father of her son, an individual with knowledge tells TheWrap.

Also Read: Rege-Jean Page Will Not Appear in 'Bridgerton' Season 2

Though “Bridgerton” has only been renewed through Season 2, Quinn has eight novels in her “Bridgerton” series and showrunner Chris Van Dusen previously told TheWrap he would like to, in turn, make a season devoted to each one of those books and their corresponding Bridgerton sibling. An individual with knowledge tells TheWrap the door is open for Page to reprise his role as Simon in potential future seasons.

“I have nothing but excitement for ‘Bridgerton’ continuing to steam train off and conquer the globe,” Page told Variety. “But there is also value in completing these arcs and sticking the landing.”

Netflix had “Bridgerton’s” anonymous narrator, Lady Whistledown, make the announcement Page was leaving the show in a statement posted to the show’s social media accounts Friday: “Dear Readers, while all eyes turn to Lord Anthony Bridgerton’s quest to find a Viscountess, we bid adieu to Regé-Jean Page, who so triumphantly played the Duke of Hastings. We’ll miss Simon’s presence onscreen, but he will always be a part of the Bridgerton family. Daphne will remain a devoted wife and sister, helping her brother navigate the upcoming social season and what it has to offer – more intrigue and romance than my readers may be able to bear. Yours truly, Lady Whistledown”

“Pleasure and a privilege! An honour to be a member of the family – on and off screen, cast, crew and incredible fans – the love is real and will just keep growing,” Page wrote in a quote-tweet of the statement.

Representatives for Page did not immediately respond to TheWrap’s request on Friday for further comment.

Rhimes chimed in on Twitter to say that, though Page won’t appear in Season 2, “Remember: the Duke is never gone. He’s just waiting to be binge watched all over again. #ShondalandMenOnNetflixAreForever”

As for where you’ll next see Rege-Jean Page, since it won’t be on “Bridgerton,” the actor recently wrapped filming on the Russo Brothers’ Netflix spy thriller “The Gray Man,” starring opposite Ryan Gosling and Chris Evans, and has been cast in a leading role in Hasbro/eOne and Paramount”s “Dungeons & Dragons” movie.