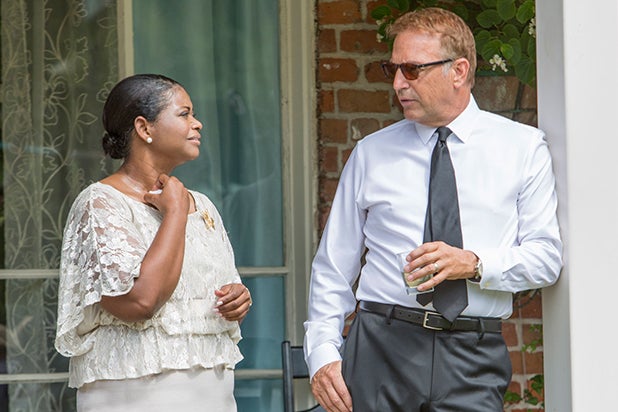 Relativity plans to release the film through its new multicultural division before the end of the year so that it may qualify for awards such as the Oscars and Golden Globes.

“Black or White” premiered last month at the Toronto International Film Festival, where it screened as “Black and White.” Open Road had been in negotiations to acquire the film but those talks failed to lead to a deal.

Relativity plans to push Costner and Spencer for awards consideration this season, though the film boasts a strong ensemble that also includes Anthony Mackie, Jennifer Ehle and Gillian Jacobs.

“Black and White” follows attorney Elliot Anderson (Costner), who’s raising his biracial granddaughter Eloise with his wife (their daughter died during childbirth). When his wife is killed in a car accident, the widower is drawn into a custody battle over the little girl with her African-American grandmother Rowena (Spencer), who believes the child should be raised by her drug-addicted, biological father.

Also read: Kevin Costner and Octavia Spencer Fight It Out in ‘Black and White’

Previously, Costner revealed he had to finance the movie himself after most Hollywood studios rejected the film. “I said it 50 times that we should make this movie and at the end of the day, I had to pay for it,” he said.

“I just thought it was an interesting movie,” he added. “I can’t speak for why [no one would finance it]. I know a lot of people want to make these big, giant movies and I understand … But I thought this movie is just as valid as those movies. So that’s why I made it.”

Elwes negotiated the deal on behalf of the filmmakers.