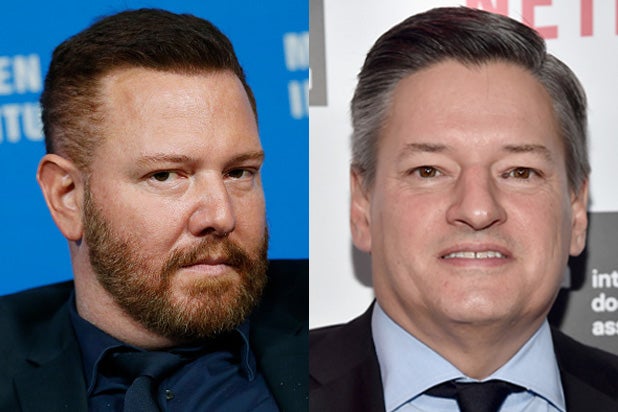 Ryan Kavanaugh accused Netflix’s Ted Sarandos of sabotaging his attempts to salvage his bankrupt Relativity Media, saying the Netflix chief even took Kevin Spacey to dinner to convince him not to take a job as chairman of Relativity Studios.

“Sleeze [sic] move,” Kavanaugh said in a January 22 email to Sarandos obtained by TheWrap. “Seriously sleezy [sic] even for you guys.”

The Relativity CEO then launched a diatribe against his former friend and business partner, trying to convince Sarandos to drop Netflix’s objections to Relativity’s reorganization plan, which awaits approval as early as Monday from U.S. Bankruptcy Court Judge Michael Wiles.

On January 21, Netflix filed a legal objection to the plan, seeking assurance that Relativity would meet a minimum number of films to the streaming service and questioning the legitimacy of Relativity’s claims of new funding for operations.

The Netflix deal is critical to Relativity’s ability to relaunch its business. It was concluded with Netflix back in 2010 when the streaming service desperately needed films, and therefore has unusually favorable terms that provide the studio with guaranteed revenue based on a percentage of each film’s box office gross. The Wall Street Journal reported in September that Netflix had paid Relativity $283 million since 2010 under the deal.

Netflix would like to get out of the deal, and Kavanaugh believes that although the contract is binding, the bankruptcy provides an excuse for Netflix to cut it short.

“I am not going quietly into the night Ted,” Kavanaugh wrote in the email. “We don’t have to have a relationship but I expect what a bargained for at a time when NO other studio would even talk to you…. I have studied our contract with a fine tooth comb. I promise you will be embarrassed.”

Meanwhile, he said that Sarandos and Media Rights Capital co-CEO Modi Wiczyk — whose companies distribute and produce Spacey’s hit drama “House of Cards” — took Spacey to dinner and tried to get him not to work for Relativity.

On January 6, Kavanaugh named Spacey and his producing partner Dana Brunetti as studio heads following an acquisition of the duo’s Trigger Street Productions.

Finally, Kavanaugh threatened to reveal that Facebook enables Netflix to have favorable broadband access and that “Netflix exists because Facebook allows it to.” Netflix co-founder and CEO Reed Hastings sits on Facebook’s board of directors.

Read the full broadside from Kavanaugh to Sarandos:

You keep up this bs and we will be forced to produce correspondence that makes you look like shit “I apologize for house of Cards it’s a one time thing of course everything else is with you” “we will never even try to make content” ” you are our true partners forever” “were sending the data on the consumers right away, not trying to skirt the contract” (no data ever came) -wonder the value a judge will place on that, “give us less movies” -now you say we’re “breaching minimums”‎.

I am not going quietly into the night Ted.  We don’t have to have a relationship but I expect what a bargained for at a time when NO other studio would even talk to you. Keep your objection we both spend a lot of money on lawyers and you will be very very embarrassed. Drop your objection we save money on lawyers you go on pretending all these studios are your friends and we are the pain in ass early deal that hurts you (and forget how you got here) just fine by me.

But if you are going to fight, if you noticed this is the one time in this whole process I came public. I have studied our contract with a fine tooth comb. I promise you will be embarrassed. Facebook shareholders will too learn the truth, netflix exists because facebook allows it to, one announcement, one piece of content, asking Reid to step off the board, and facebooks 1.3billion users dwarfs netflix overnight. So far Facebook  has been kind enough to just open sky driven broadband so it’s most coveted board member and primary advisor  could come behind and put up content. That is changing as we speak. Either slow or fast. But it is changing. And you keep up this bs I have no choice but to defend us.

No Kevin isn’t gona be swayed by a dinner with you and mody whogivesashitit.

No you’re not gonna convince them not to take this job. And no your not going to get out of your contract. Sleeze move. Seriously sleezy even for you guys. You were one of the good ones sad when Hollywood power goes to ones head. The way up is easy. How you treat the way down that is the hard part. You see the same people going down you saw on the way up. Curious to see how you will handle it.