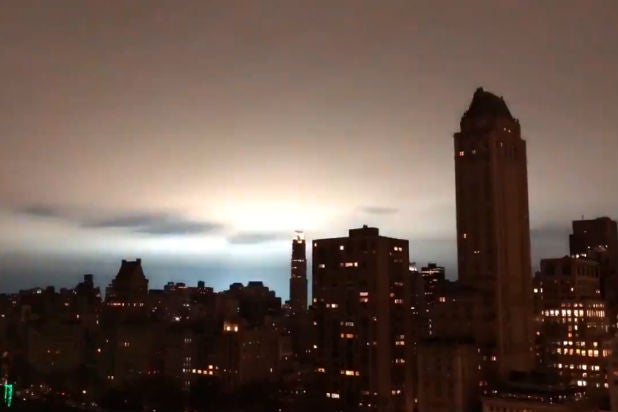 If you’re living in New York City and worried about an alien invasion, we feel you.

At around 9:15 p.m. ET, the nighttime NYC sky suddenly lit up with a flashing blue light that was visible all over the city. Words cannot do justice to this event which, we’ll admit from the safety of Los Angeles, looks positively apocalyptic:

9:12pm NYC – what's this bright light? Been like this for a few minutes pic.twitter.com/DxFMEmZsoG

Now, before you panic, it’s actually nothing to worry about. The spooky visuals were the result of a transformer explosion at a Con Ed plant in Astoria, Queens, and not evidence of any existential threat posed against the people of New York. And according to NBC, a Con Ed spokesperson said no one was hurt.

Also Read: 'Brooklyn Nine-Nine' Filtered Through 'SVU' Is Even Better Than It Sounds (Video)

But it was at least 20 minutes after the light show started that authorities were able to explain what happened. Plenty of time, in other words, for people to mildly freak out and cope in the traditional way: by joking about the crazy thing they all saw on Twitter.

A lot of people immediately thought of alien invaders — especially the aliens who destroyed the entire world in “Independence Day.”

Um. What’s up w nyc sky right now? Is there a light show somewhere ? Or is this Independence Day for real?

Look, I’m not saying the weird NYC blue light is aliens. But this image from the scientifically accurate film INDEPENDENCE DAY certainly suggests it is. pic.twitter.com/m0bx9l3v4Q

Funny stuff, but as far as we’re concerned these people have it all wrong. This isn’t what happens when the “Independence Day” aliens finally strike, it’s what happens if some idiot shuts down the Ghostbusters’ containment unit and accidentally summons Gozer the Gozarian. Or maybe it’s immortals trying to kill each other.

Luckily, we’re not the only ones who think so.

Many Shubs and Zulls knew what it was to be roasted in the depths of a Sloar that day, I can tell you.

One more vid of the best light display we’ve had here in Fun City in years, courtesy (apparently) a transformer fire in Astoria, Queens: pic.twitter.com/fBvMfJ3DgV

It was caused by "The Quickening"#bluelight #queens #nyc #astoria #ConEd #Highlander pic.twitter.com/6SB6IfrHOn

On a scale of Ghostbusters to Suicide Squad how would you rate your Astoria sky laser experience this evening? #bluelight #nycbluelight #Queens

I love that the reaction to massive blue light over part of Queens were Spider-man, Ghostbusters, Aliens, and, upon finding out it was actually a power plant explosion, “this is how we get Dr. Manhattan.” New York has been attacked so many times all of pop culture is handling it.

Stay safe out there, New York.

July 8, 1947, the Roswell Daily Record reported the “capture” of a “flying saucer”… and the rest is conspiracy theories history

Alien existence hasn't been proven, but these films encourage our imagination. What better way to celebrate than with an alien invasion movie marathon? Here are eight alien-centric films to watch to mark the occasion.