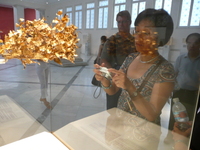 Marion True has finally caught a break: a Greek court threw out criminal charges against her in the case of a golden wreath bought by the Getty in 1993, and returned to Greece earlier this year. The AP is reporting that a three-judge panel ruled today that the statute of limitations in the case had run out. (The wreath is pictured here at Athens’ archeological museum, but apparently it has been moved to Thessaloniki.) True remains on trial on criminal charges in Italy, and she still faces a possible trial in Greece over possessing undeclared antiquities in her Paros vacation home. True has denied all charges against her. More: An interested observer points out this unusual fact: in dismissing the charges, the Greek judges accepted the argument of True’s lawyer that the California three-year time limit had expired. I wonder how unusual it is for a Greek court to accept a foreign law as a legal argument.