What better way to greet the Jewish New Year than with a packed sneak preview screening of Bill Maher’s new religion-skewering documentary, "Religulous"? 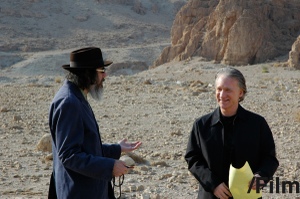 For years now we have been listening to Maher diminish and mock religion in general, religious people in particular and especially Catholicism, with a very special glee. Now he sets out across the globe on a more pointed anti-faith inquiry, adopting a style that’s kind of Borat-meets-Michael Moore, but without the comic commitment of the former or the intellectual acuity of the latter.

What I mean is, religion is easy pickings. We all know about the suicide bombers, the pedophiles, the golddiggers and the closeted anti-homosexual preachers. Where’s Maher going by putting these all end to end?

When he chooses to probe the inconsistencies in Christian dogma by querying truck stop drivers at a roadside Mass, or playing ‘gotcha’ with the guy who plays Jesus at the Holy Land amusement park, it isn’t exactly a fair fight. And when Maher unexpectedly comes across a maverick priest at the Vatican who scoffs at his religion’s hypocrisy, Maher seems unsure where to put this iconoclast in his religion-bad; agnosticism-good cosmology.

More revealing is when he gets U.S. Senator Mark Pryor, who is a fundamentalist Christian, to admit that you don’t need a particularly high IQ to get into the Senate. Or when he queries his own Jewish mother about why he and his sister were raised Catholic, with no acknowledgement of her religion, nor discussion of the family decision to abandon the church.

In many scenes, Maher does all the talking, laying out his own doubts while allowing the interviewee only a few words – or a shrug – in response. (And by the way, that guy on the left in the picture is Larry Charles, the director, not some religulous nutbar; it would have been a good idea to tell this to viewers, since Charles appears inexplicably in lots of frames.)

But Maher must be given credit for attempting a courageous statement of militant secularism in a world where religion evokes knee-jerk support. He clearly believes that faith – or belief in God, or truth, or whatever you call it – is behind many of the ills in today’s world, that blindly following religion is leading the world toward Apocalypse, a manmade one. The missing piece in the film is the more balanced reality, which is that most people temper their religious observance with the practical realities of the material, science-based world, even when those two things stand in stark contradiction.

Nonetheless, Maher’s impassioned plea for a world where reason rules decision-making rather than religion, is valid and relevant. In our age of politicized religious fanaticism, one might even call making this film a leap of faith.