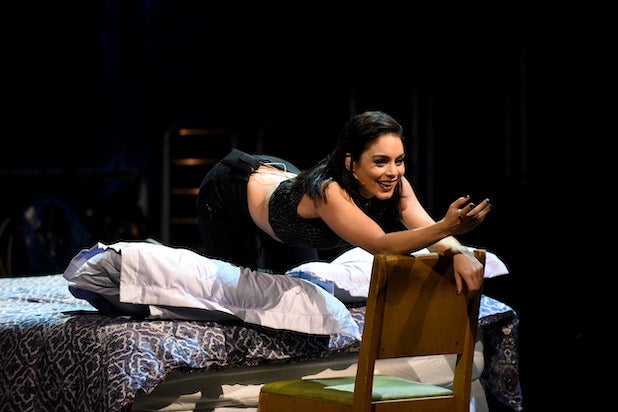 Fox’s “Rent” aired Sunday, decidedly not live. After male lead Brennin Hunt broke his foot during Saturday’s rehearsal, the network decided to air “previously recorded” footage from the day before during its planned 8-11 p.m. telecast, rather than have the cast perform the show as planned.

However, viewers in the studio audience were treated to an actually live version, with the stars performing numbers from the musical with a few changes to the set to accommodate Hunt’s wheelchair. Fox dubbed this the “cast concert version,” sharing several videos from the numbers that were performed live on Twitter later Sunday evening.

For those of you at home, the live TV musical began with “previously recorded” footage of Hunt, who plays the male lead Roger, taking the stage for a few numbers with his co-stars.

The rest of the cast — which included Brandon Victor Dixon as Tom Collins, Jordan Fisher as Mark Cohen, Mario as Benjamin Coffin III, Kiersey Clemons as Joanne Jefferson, Vanessa Hudgens as Maureen Johnson, Tinashe as Mimi Marquez and Valentina as Angel — then appeared on stage live ahead of the show’s first commercial break to let viewers know Hunt would be “unable to perform tonight” and that “most of what you see tonight is from last night.”

“Rent’s” original Broadway cast joined the Fox production’s stars for the show’s “Seasons of Love” finale, which was actually performed and broadcast “live.”

The network had to scramble to figure out how the show would go on before the broadcast because “Rent” — just like the network’s “Grease: Live” three years ago — did not utilize understudies.

Watch clips from the live version below — both from Fox and from members of the studio audience.

BUT, the producers & cast wanted to do SOMETHING for the 1000+ audience members on the stage tonight. SO, the full cast (Brennin included, in a wheelchair) effectively did a high energy table read with live vocals & the band doing their best to synchronize to the broadcast. pic.twitter.com/3gHKggVXcV

Tinashe wheels Brennin across the stage during a commercial break. Crowd in the studio is going nuts! #RentLive #RentOnFox #Rent #RentLiveOnFox pic.twitter.com/xXEW7bxNvl

The cast concert rendition of “Over The Moon” recorded tonight. #RENT pic.twitter.com/vDPy5nOQji