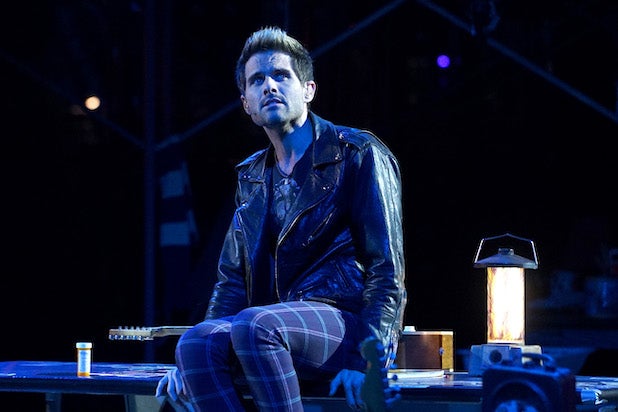 Fox’s live TV musical “Rent” began with pre-taped footage Sunday — after male lead Brennin Hunt broke his foot Saturday during rehearsal — and that’s how the majority of the show will air tonight.

Hunt, who plays Roger, took the stage with some of his co-stars at the top of the show for a few numbers, with a “previously recorded notice” appearing on screen to signal the scenes were from the taped rehearsal the day before.

The rest of the cast — which includes Brandon Victor Dixon as Tom Collins, Jordan Fisher as Mark Cohen, Mario as Benjamin Coffin III, Kiersey Clemons as Joanne Jefferson, Vanessa Hudgens as Maureen Johnson, Tinashe as Mimi Marquez and Valentina as Angel — then appeared on stage live ahead of the show’s first commercial break to let viewers know Hunt would be “unable to perform tonight” and that “most of what you see tonight is from last night.”

The actor addressed the situation himself via Instagram just before the show began, showing his costume being adjusted to accommodate a cast on his leg. “Breaking my foot last night was not fun, but it’s been great being back on set with everybody,” Hunt said. “I am just truly honored and blessed to be part of this ‘Rent’ family.”

The news Hunt wouldn’t be able to join his cast mates to put on a live production wasn’t surprising, as Fox addressed his injury earlier Sunday, saying the show would go on — but not revealing if or how the lead would perform.

At the time, an individual with knowledge of the production told TheWrap there was a possibility the broadcaster would need to use the pre-taped rehearsal footage during what is intended to be a live show, as “Rent” — just like 2016’s “Grease: Live” before it — did not utilize understudies.

“Last night during a live performance of FOX’s production of ‘Rent,’ one of the actors, Brennin Hunt, was injured,” Fox said in a statement before the show. “But in the spirit of ‘Rent,’ everyone — producers and cast, original and current — is dedicated to ensuring that tonight’s broadcast must, and will, go on.”

“The experience of putting together this beautiful new production of my brother’s work, while emotional, has been truly joyous for all of us,” Julie Larson, sister of the late composer of “Rent,” Jonathan Larson, added in her own statement.

“This new cast has embodied the spirit of the show from day one and they embraced Brennin with positive and uplifting love in his moment of need. ‘Rent’ has always been about resilience and community. I speak from my heart when I say that we have a spectacular show for you tonight. We can’t wait for a new generation to experience Jonathan’s legacy.”