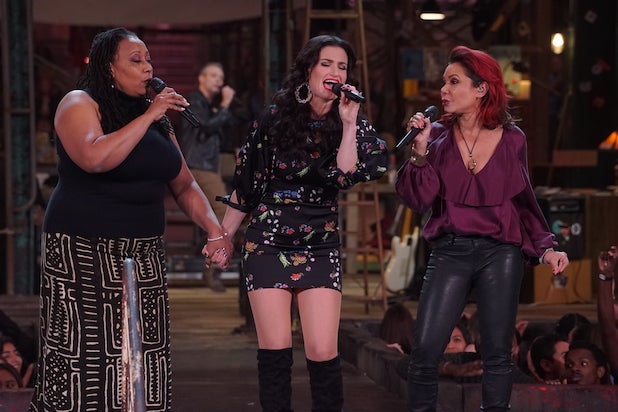 The stars of Fox’s live — but actually mostly pre-taped — production of “Rent” were joined by the original Broadway cast for the three-hour Sunday broadcast’s “Seasons of Love” finale, which was actually performed “live,” according to the notice in the upper right corner of the screen.

The scene was “reworked” to include the Fox production’s star Brennin Hunt, who had to sit out the show after breaking his foot during dress rehearsal Saturday. (The network used footage from that Saturday performance for much of the broadcast since Hunt injured himself in the final minutes of the rehearsal.)

The finale also included a tribute to “Rent” composer Jonathan Larson, who died in 1996 the night before the Off Broadway premiere of the Tony- and Pulitzer-winning musical at the New York Theatre Workshop. He was 35.

The live TV musical began with “previously recorded” footage of Hunt, who plays the male lead Roger, taking the stage for a few numbers with his co-stars.

The rest of the cast — which included Brandon Victor Dixon as Tom Collins, Jordan Fisher as Mark Cohen, Mario as Benjamin Coffin III, Kiersey Clemons as Joanne Jefferson, Vanessa Hudgens as Maureen Johnson, Tinashe as Mimi Marquez and Valentina as Angel — then appeared on stage live ahead of the show’s first commercial break to let viewers know Hunt would be “unable to perform tonight” and that “most of what you see tonight is from last night.”

They also announced Hunt and the musical’s OG cast would join them on stage for the finale, which had been adjusted to account for Hunt’s injury.

The actor addressed the situation himself via Instagram just before the show began, showing his costume being adjusted to accommodate a cast on his leg. “Breaking my foot last night was not fun, but it’s been great being back on set with everybody,” Hunt said. “I am just truly honored and blessed to be part of this ‘Rent’ family.”

The network had to scramble because the show — just like the network’s “Grease: Live” three years ago — did not utilize understudies.