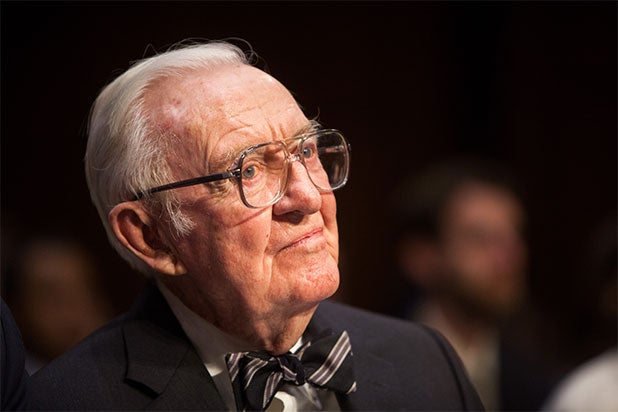 Former Supreme Court Justice John Paul Stevens is calling for a repeal of the Second Amendment, saying the amendment is outdated — and the reaction is exactly what you’d expect.

In an op-ed for The New York Times, Stevens (who was appointed by President Gerald Ford, a Republican, in 1975) wrote about March For Our Lives and the demand for gun control.

“That support is a clear sign to lawmakers to enact legislation prohibiting civilian ownership of semiautomatic weapons, increasing the minimum age to buy a gun from 18 to 21 years old, and establishing more comprehensive background checks on all purchasers of firearms,” he wrote. “But the demonstrators should seek more effective and more lasting reform. They should demand a repeal of the Second Amendment.”

Stevens added that the right to bear arms has been misunderstood to extend past its original intent, the “preservation or efficiency of a ‘well regulated militia.'”

“In 2008, the Supreme Court overturned Chief Justice Burger’s and others’ long-settled understanding of the Second Amendment’s limited reach by ruling, in District of Columbia v. Heller, that there was an individual right to bear arms. I was among the four dissenters,” he continued.

The decision, which he says is wrong and debatable, should be overturned and getting rid of the Second Amendment would “be simple and would do more to weaken the N.R.A.’s ability to stymie legislative debate and block constructive gun control legislation than any other available option.”

Also Read: Jennifer Hudson: Gun Violence 'Can Happen to Anybody'

He concluded, “That simple but dramatic action would move Saturday’s marchers closer to their objective than any other possible reform. It would eliminate the only legal rule that protects sellers of firearms in the United States — unlike every other market in the world. It would make our schoolchildren safer than they have been since 2008 and honor the memories of the many, indeed far too many, victims of recent gun violence.”

People took to Twitter in droves to give their opinion on Stevens’ proposition. People were seemingly split on whether they agree with Stevens.

“I am all for repealing the 2nd Amendment. It’s an archaic, historic provision that has no place in modern society,” wrote one user, while another said Stevens has “lost a few marbles.”

Read the full op-ed here, and read reactions to his proposed amendment below.

I am all for repealing the 2nd Amendment. It's an archaic, historic provision that has no place in modern society.

Gun interests don't need the 2nd A when they have such strong political support in legislatures.

I think this is a public conversation we *should* have, but I'm not convinced we need to repeal #2A to move toward a world w/ fewer guns

Justice John Paul Stevens is retired for a reason. At 97, it's safe to say he's lost a few marbles.

I fully back this proposal. The 2nd Amendment, as written 240 yrs ago, is totally irrelevant in the 21st century. I believe the founding fathers would agree fully. Rewrite it.

OK…pile on, haters. Tell me how your ‘militias’ can stop tyranny. Fuck off. https://t.co/NE6KgVFbrw

Saw that ex-Supreme Court Justice John Paul Stevens just wrote an op-ed in favor of repealing 2A. Not that I’m necessarily in favor. But it adds an interesting element.

The majority of Americans, on both sides of the political aisle, don't want to repeal the Second Amendment. The majority wants a better background check process & possibly banning assault weapons. Please don't spook the crazies out there.

#TuesdayThoughts What is Justice John Paul Stevens THINKING when he said the government needs to Repeal the Second Amendment? We need the #2A to defend ourselves from those who want to harm us. Did you take into account the officer in MD that saved lives with his 2A rights?