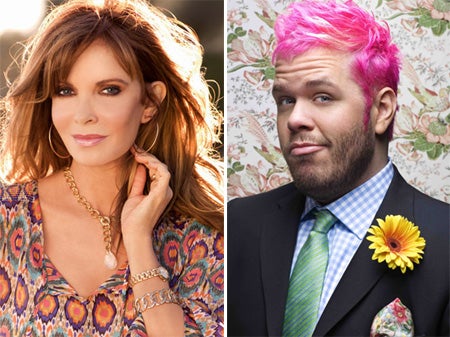 Here’s a classic case of jumping the gun, with a new media twist.

“This is so tragic!” Perez wrote. “According to reports we are getting from multiple sources in Latin America, Charlie's Angels actress Jaclyn Smith attempted suicide on Tuesday while at her vacation house in Islas de la Bahia in Honduras on Tuesday. She was airlifted via helicopter to a hospital in San Pedro Sula, with a gun wound in her head. Smith is in critical condition.”

Problem: Smith was not in critical condition. Nor was she in Honduras. She was actually in Los Angeles.

"She is alive and well,” Smith’s publicist Jay Scwartz told TMZ.com. “I spoke to her this morning."

Later, Smith took to Twitter – where else? – to proclaim herself not dead … in the third person:

“Jaclyn is safe and home with her family. She is not in Honduras. It is a lie.”

It turned out that the woman in critical condition, according to new reports, was Sandra Franklin, the wife of a Charlie's Angels producer.

All of which forced Perez to use the strikethrough option on his post rather judiciously: 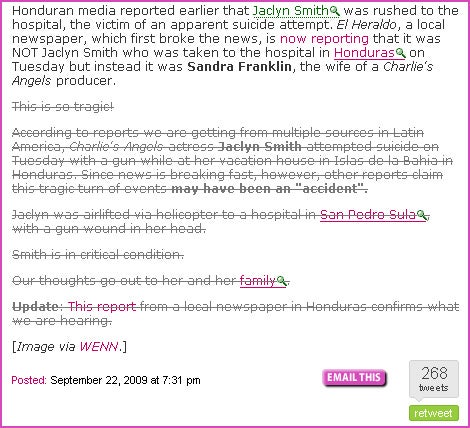 Hilton, however, later defended his original report in a Tweet.

“I did not mistranslate that article from the Honduran newspaper,” he wrote, linking to this screengrab: 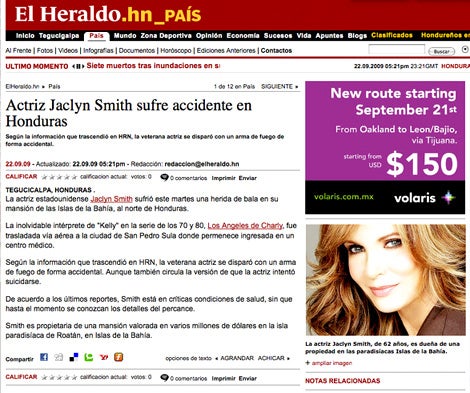 But the Internet has allowed them to be disseminated at supersonic speed.

What’s troubling is that Perez Hilton rushed to publish this post about Smith without tagging it as “unconfirmed” or simply “reports:” – and apparently without checking in with the actress herself.

At least he didn't draw his signature Photoshopped penis on her photo.